I tried hard, squinted my eyes, but couldn’t see the top of Chembra peak.  Fluffy clouds were hiding the grandeur of Chembra peak. As the soft clouds glided swiftly along with a waft of wind, myriad patterns of nature unfolded in front of us. We had almost completed the trek. Another 30 minutes of trekking would help us discover a beautiful heart shaped lake enroute Chembra peak trek. We sat catching our breath back and glanced at the trek further. The climb, partially concealed by clouds, looked steep and daunting. But to marvel at the heart shaped lake, we rubbed off dirt and resumed the trek. Gradually, we reinstated our quest for nature and started trotting against the rough terrain and towards a phenomenal creation of nature! However, we would have to return from the lake as trekking upto the peak is not allowed anymore.

Chembra peak in Wayanad is one the most amazing treks one can opt for in South India. It doesn’t have the unpredictable terrain which is found in most of the rain forest treks in South India. Instead, Chembra peak is a perfect example of a trek which can provide rewarding views for anyone who is interested in nature, at a moderate effort.

Located at a distance of 13 KMs from Meppadi town, Chembra peak stands tall beyond the tea plantations and lush green landscapes. After you drive almost 10 KMs from Meppadi towards Chembra peak, you will reach a ticket counter. You have to buy tickets here in order to reach the heart shaped lake. The tickets include your guide fees, however, you wouldn’t require a guide to complete a trek as the path is marked clearly. But, paying these fees is mandatory. 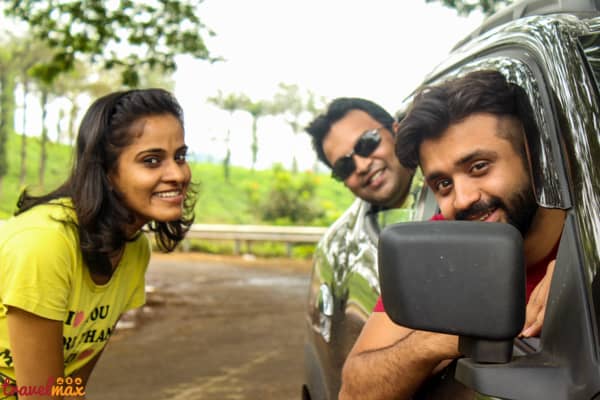 Chembra peak starts amidst tea plantations and gradually takes you in the damp forest and surreal surroundings. The initial leg of trek is easy as you trot on dry twigs, with bountiful views of tea plantations and valley on your right. After a while, you will find yourself amidst stalwart trees and filtered sunlight. The Chembra peak trek starts becoming a bit steep gradually. We continued the trek cautiously, making the grip on ground stronger with every step. 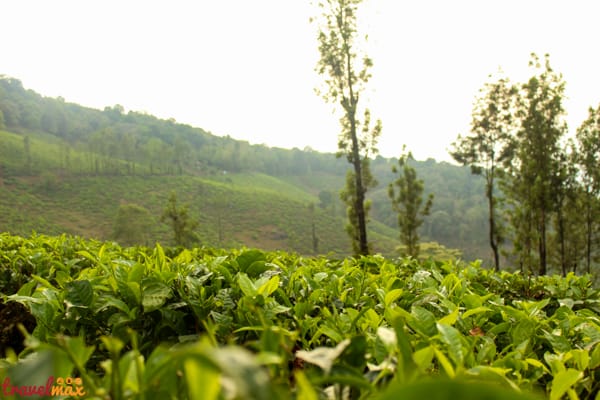 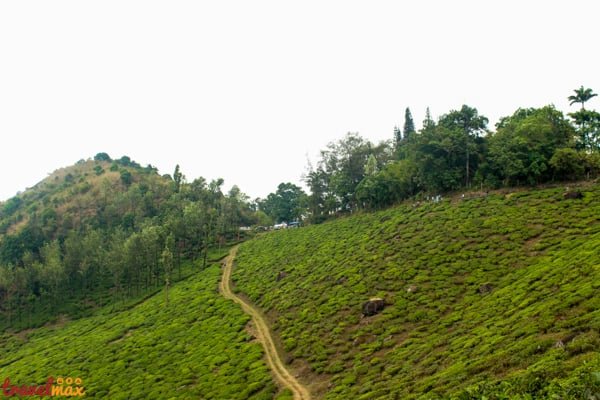 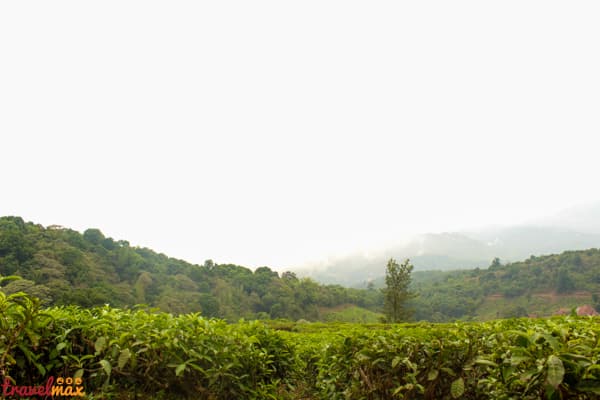 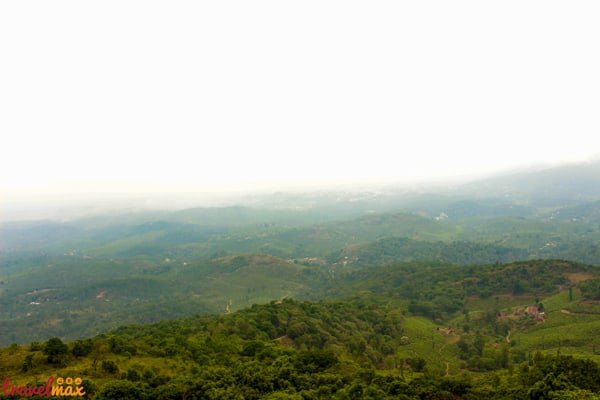 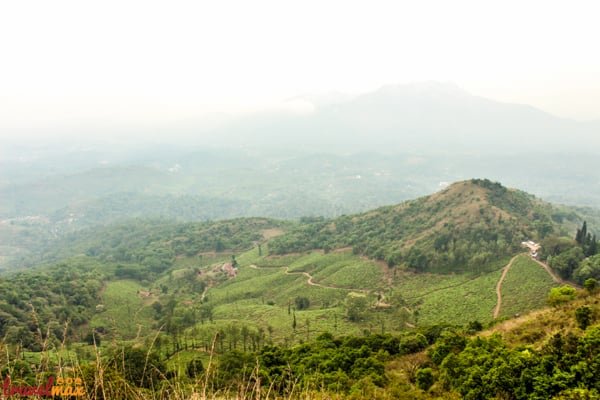 Bountiful views at the beginning of the trek 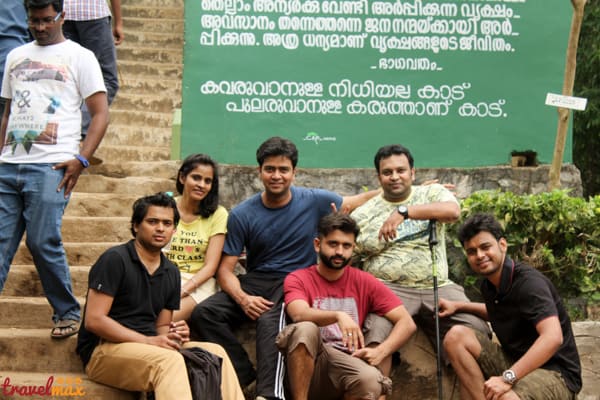 A pit-stop before the actual trek starts 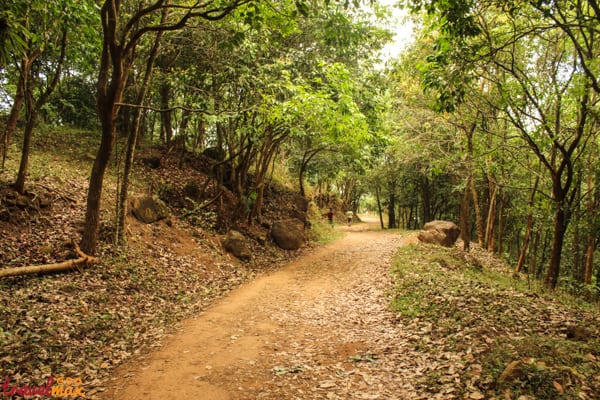 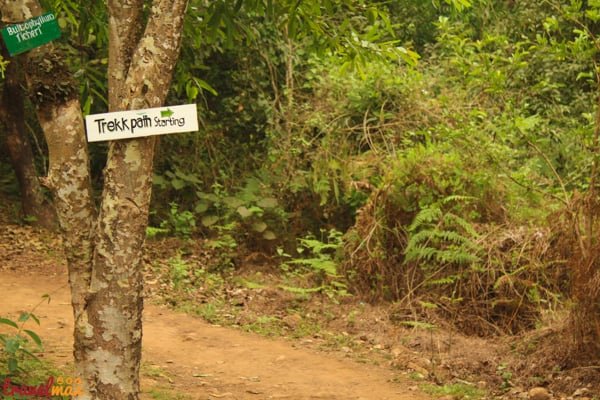 After we continued our trek for a while, we crossed the denser part of the forest and started ascending on a steeper part of the trek towards Chembra peak. The view behind us opened up and the valley which we saw earlier, looked even more gorgeous. With every step, we were inching closer towards the heart shape lake.

Further in the trek, we reached a point where clouds were almost at the same height as us. The clouds concealed the peaks around us but, Chembra peak stood tall, protruding above the clouds. However, the clouds gradually covered Chembra peak as well. We spent some time on this flat land before starting our last leg of Chembra peak trek. 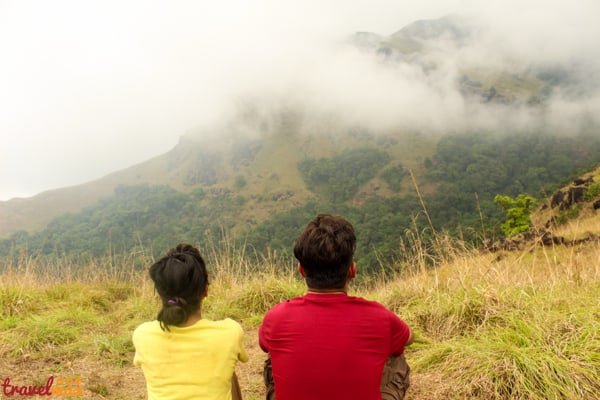 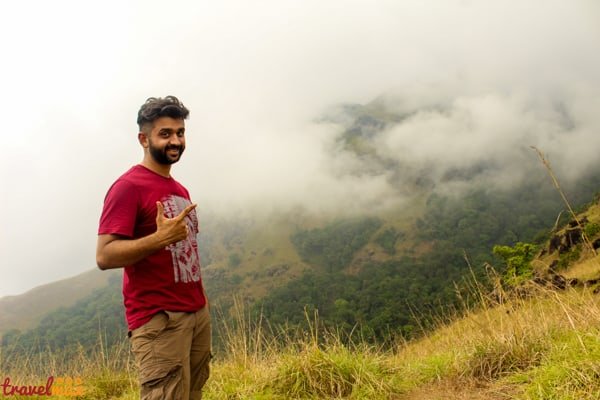 Admiring the clouds gliding with the wind 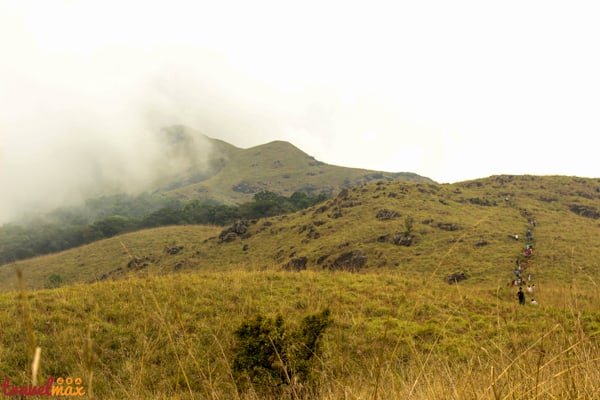 The last leg of trek towards Chembra peak lake

The trek further looked very steep. However, it took us lesser effort as compared to the previous trek. After cautiously navigating our way pass boulders, we finally reached the heart shaped lake. The lake looked beautiful as the gentle wind created ripples in the water. There were government employees keeping a watch on us to make sure that we don’t touch the water or take a dip in it. Known as “hridhayathadakam” in the local language, the heart shaped lake is a beautiful sight to marvel at. We hiked around the lake and discovered a cliff, hanging over a valley, allowing a gorgeous view of beautiful landscapes stretched till the horizon. We spent some time there, marveling at the nature’s beauty. The Chembra peak stood tall behind us as we stared in awe at the valley below. 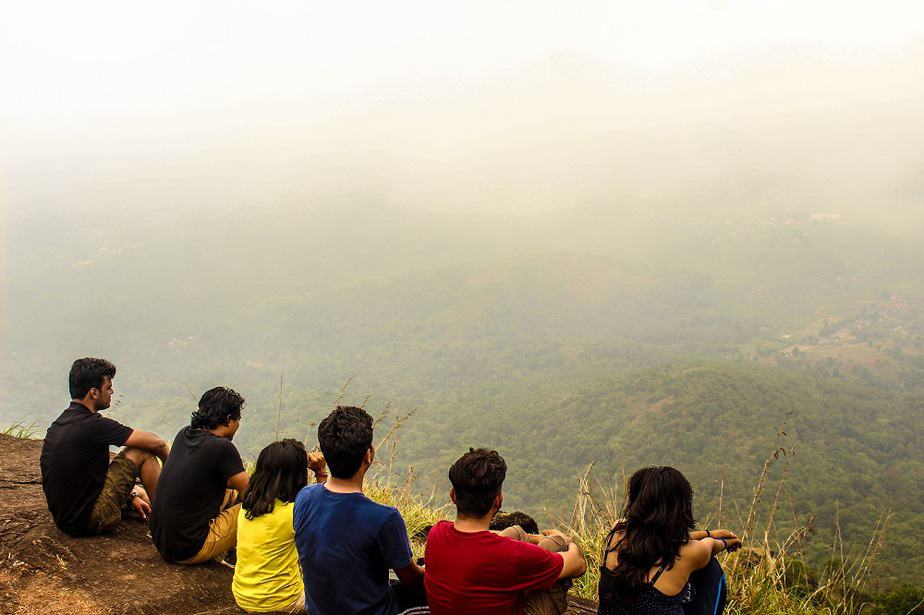 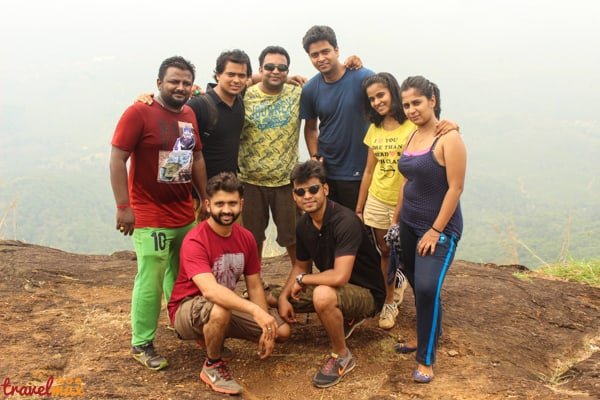 With my gang at the view point 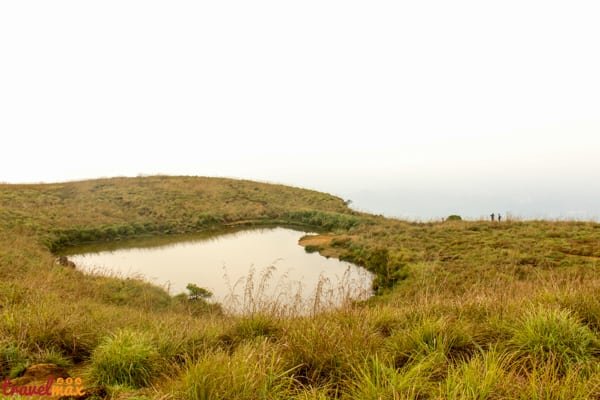 The beautiful heart shaped lake! We were not allowed to trek further up and get a better view 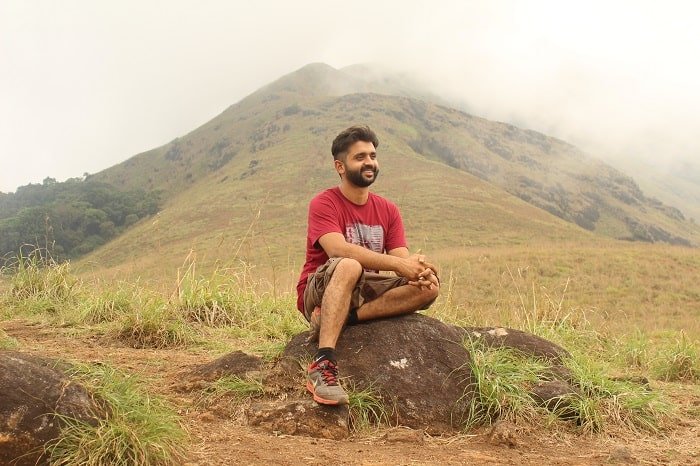 In background is the Chembra peak. Trekking till the top is unfortunately banned by the government

After spending some time near the heart shaped lake, we started descending. There were chances of rain and we were supposed to trek down before the rains started. I was the last person to leave the spot as I tried to capture the best view of the heart shaped lake. But, the government officials were too strict to allow me trek a bit further. When I asked the reason why weren’t we allowed to trek till the top, I was given influence of Maoists as a reason. Well, it’s sad how politics can bar you from discovering nature! But, maybe this is just an excuse. The real reason may be saving an endangered bird species which is comparatively abundant near Chembra peak.

Finally, we returned back to the parking spot where our cars waited for us. On our way back, the sky was getting darker and the sun fainter. We were now heading back to our town, where a rainy evening waited for us!

You can read more about Wayanad on my blog. I have mentioned the other blog posts below.

Places to visit in Wayanad

I have answered some questions which I think can arise while planning for Chembra peak trek.

Can I trek till the top of Chembra peak?

Earlier, the trek used to be till Chembra peak. But, now you can only trek till the heart shaped lake. Due to the influence of Maoists, the government has banned the trek till the top of Chembra peak. However, this seems to be just an excuse. The actual reason is most likely saving an endangered bird species which is abundant only near the Chembra Peak.

How to reach Chembra peak?

If you have a car, you can drive till the parking spot from where the trek starts. If you are relying on public transport, there are buses plying from Kalpetta to Meppady. From Meppady, you can get an auto rickshaw which will charge around Rs 200 for one way. You will hire the whole auto rickshaw for Rs 200 and not per person

You can not camp near the heart shaped lake. It was allowed 4 years back, but camping is now banned. This ban is unfortunate as I would consider it a beautiful camping site!

How long and tough is the Chembra peak trek?

The grade of Chembra peak trek is easy – moderate. I saw some kids completing the trek! However, the trek becomes difficult in monsoon as the rains tend to make the path slippery.

Is there a permission required for Chembra peak trek?

Yes, you need a permit from the forest departments. But, you can get the same from ticket counter itself. You don’t need to get a permit from anywhere else in advance.

How much does Chembra peak trek cost?

For a group of 10 people, the trek would cost Rs 750. For every additional member, Rs 75 more has to be paid. Carrying a camera would cost Rs 40. For foreigners, the cost would be double.

What are the timings for Chembra peak trek?

The forest department office, which issues permits and tickets, open at 7 am. You can start trekking once you have the tickets. The tickets are issued till 2 pm. However, you might have to leave the heart shaped lake by 3 pm, if there are chances of rain. The government officials would not allow you to stay there. So, it’s best recommended that you start the trekking latest by 10 am as rains are considered to be frequent in the evening time.

Yes, carrying plastic bottle is allowed. However, you will have to give Rs 20 per bottle as deposit, which is refundable once you complete the trek and show the bottle. This impressive step has been taken to keep the Chembra peak zone plastic free.

Smoking and drinking is strictly not allowed in the Chembra peak zone. In fact, there is a hefty fine, around Rs 5,000, if you are caught smoking or drinking

You might spot wild life. But, because there are many trekkers frequenting the place, the chances of spotting wild life is minimal.

Is there a guide required for Chembra peak trek?

Actually, there is no guide required for the Chembra peak trek. It is a clearly marked trek and you have other fellow trekkers along with you. However, a guide is compulsory and his cost is included in the ticket cost.

Is high level of fitness required for the trek?

The trek is pretty moderate and a basic level of fitness would suffice to complete the trek.

Which is the best season for the trek?

September – February might be the best season. March, April & May tend to be a bit hot. But, if you are lucky, you can discover the day to be cloudy. June, July & August are monsoon months which would make the trek slippery. However, the landscapes are lush green and amazingly beautiful.

I hope you liked the blog post and found it to be useful. If I have not covered your question, share it in the comment section.

Have you been to Chembra peak trek? Share your experience with me!

Bhangarh Fort, Visit to the most haunted...

Adventure Activities in Europe – Recommended by...

How to Spend Time at Kovalam Beach?

Tata Nexon – A First-Hand Experience of...

Fun Things to Do in Thekkady with...

Redefining adventure – Trekking with a Naga...

Hello Umang,
This is very informative. Thanks for the update on the revised fee.
My husband and I are planning to go trekking for this new years. Finding a hotel seems to be l difficult considering the time we have. Any places that you would recommend??

Yes, I know a property which is available. Let me know if I can help you book it.

I am planning for a trek in the month of June. What are the chances of the peak being closed ? Also let me know if they close due to heavy rains because I have been coming across articles that says its closed during peak of summer for months like April and May

Hi Pallabi, the peak remains shut irrespective of the weather. The entry at the peak is restricted to save a rare bird species from becoming extinct

Bro, any other good place near Chembera peak other than Edakkal caves ?