Welcome to Travelmax, non-commercial blog started by Umang Trivedi. Please support me by following me on Instagram or Twitter. (Links open in new tab). It motivates to continue writing for you 🙂 Happy Reading..

The faint sunlight was filtered through dense clouds. A slight nip in air started to culminate into cool wind. Our jeep engines hummed to life and we were set to explore wilderness and track serendipitous movements of wildlife. With hopes in our heart and curious eyes, we entered the dense and lush green forest of Bandipur National Park. The clock struck 4 pm as we gradually ventured in the denser parts of forest. Curious antelopes and spotted deer stared at us as we scanned the mud roads for tiger footprints and tree tops for evening birds. Our evening safari in Bandipur National park had started! We were to explore one of the Best National Parks in India. 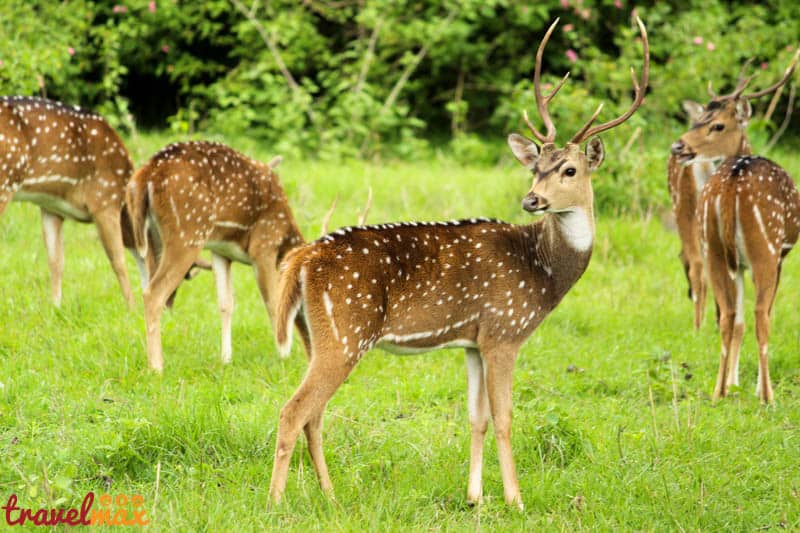 We saw a herd of deer staring us curiously as soon as we entered the dense forest. Around 6-8 spotted deer stopped grazing grass to evaluate the new guests. They seemed pretty carefree as if accustomed to giant green objects scanning the forest every evening with whirring of clicks, shutters and humming of engines. Some younger calves seemed startled and eloped away, not so far from their mother. The mother deer stared nervously at us, yielding a protective look on face. She was more curious than any other deer, she had a child to protect after all! 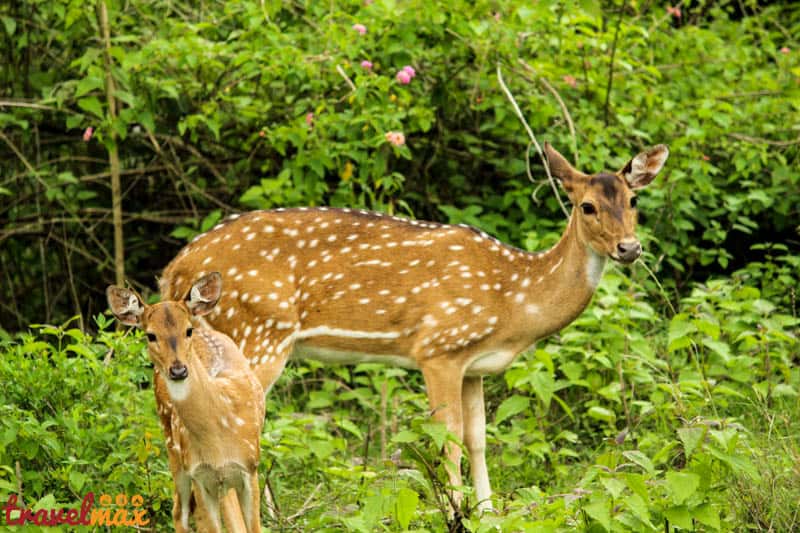 A protective mother and her calf 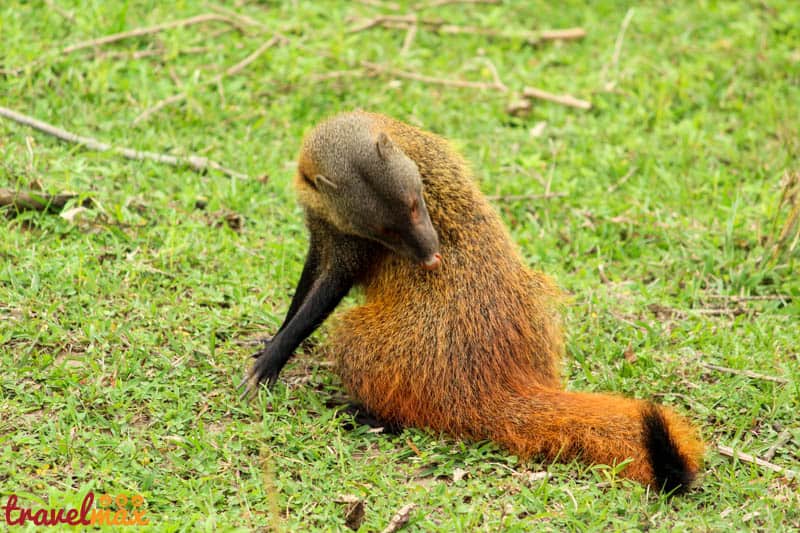 We saw a pair of mongoose cross our way and it halted our journey. The mongoose had a faint hint of red color, dominated by deep shades of brown. Unperturbed by our presence, they continued sniffing the earth for something to nibble on. Mongoose mostly stayed with a partner and roamed around in a pair. We discovered a mongoose to have found a deer carcass and it started feeding on it nonchalantly. Generally, mongoose don’t feed on meat and hence, it was a rare sighting. Most of the meat was consumed by a predator, but the mongoose kept on scramming for tethers of meat attached to bones. After fiddling for some minutes, it started pacing around again for other form of food. 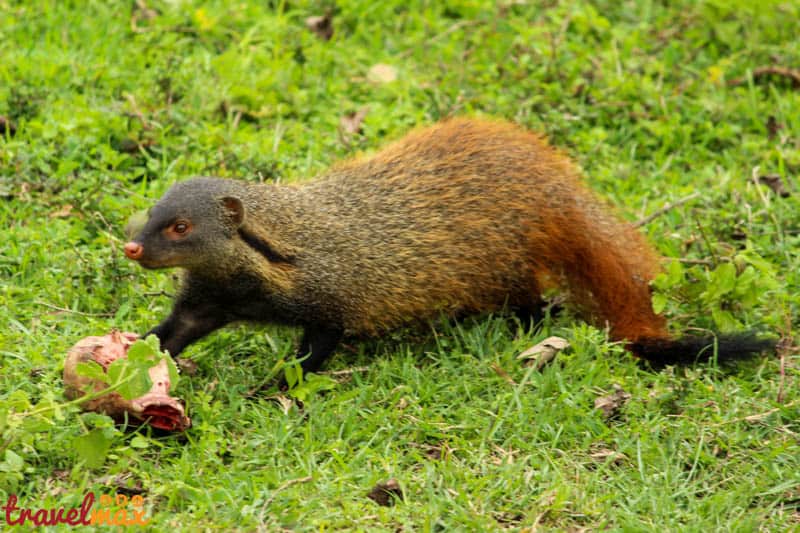 A Mongoose fiddling with a deer carcass

We left the mongoose in peace and ventured ahead in search of predators. We stopped at a lake where a tiger had been seen earlier. Suddenly, we saw an anxious Gaur jumping around frantically as a pair of ducks swam around in the lake peacefully. The green forest in backdrop and moist tree leaves created a magical ambiance! 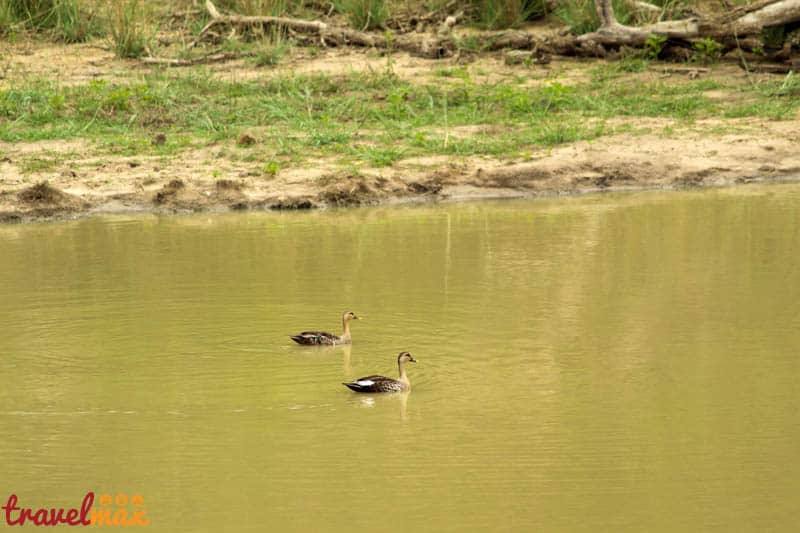 A Pair of ducks swimming around peacefully 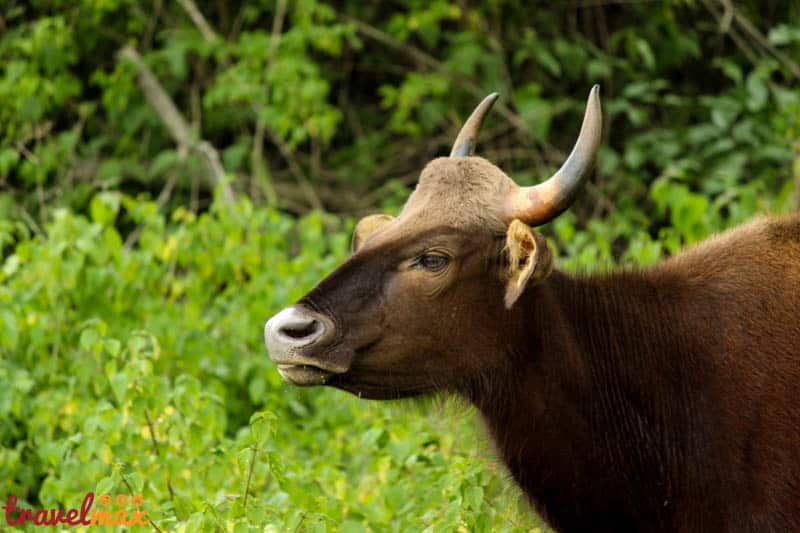 We hummed our way further in forest and encountered at least 15 Gaurs laying their curious eyes on us. At times confused with American Bison, Gaur is completely different species. It is sometimes referred as the Indian Bison which may not be correct. The key differentiating factor for a Gaur is the white socks. The apparent resemblance to bison in size and masculinity might confuse the spectator. Gaurs generally stay in herds, but it’s not rare to see a solo Gaur venture away from the herd for a while. Generally, Gaurs are peaceful animals and rarely show aggression towards travelers. But, one should be careful if a young calf accompanies a herd. Not only the mother but the whole herd can act protective of the calf. This herd which we saw had a calf or two accompanying them. So we decided to tread carefully and swiftly move away. 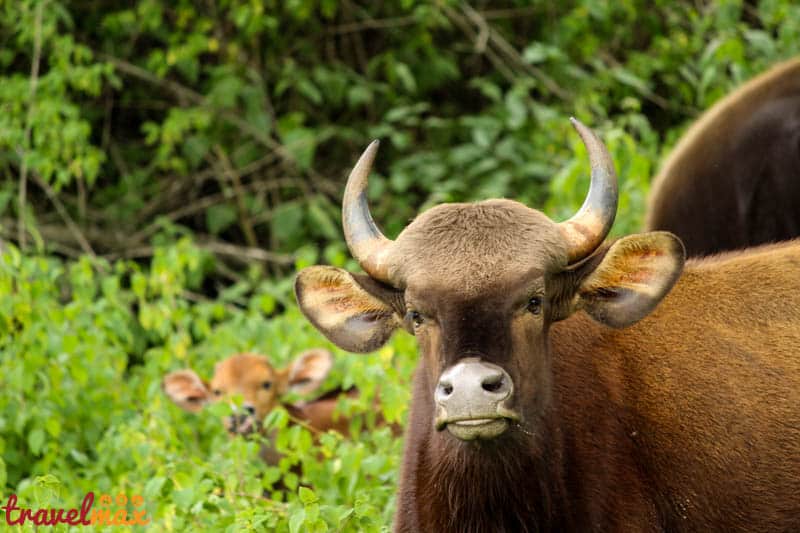 A Gaur with calf

Gaur trying to fight the birds away! 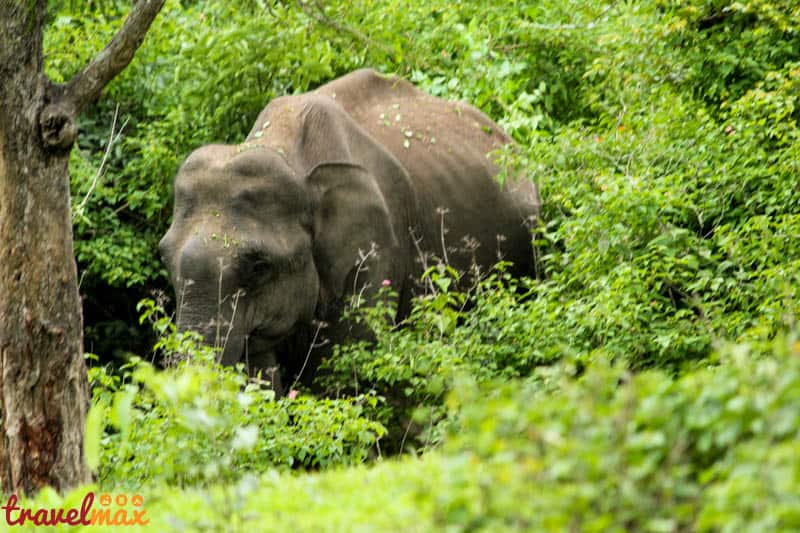 Elephant hidden away from us, or that’s what she thought

We also saw an Elephant family parading through the dense forest interiors, shying away from us. At a point, we thought we heard a tiger’s roar. But, it was just the mother elephant trying to help the calf out of bushes. After some time, we saw a Tusker (Male Elephant with tusks) who quickly vanished in the forest, not giving us time to click a snap. A lone tusker is considered to be dangerous and has the prowess to topple down a fully loaded Jeep! It’s easy to provoke a tusker in wild and pin drop silence is recommended while facing one. A tusker generally abandons their matriarchal family at an age of 14 or 15. They regularly enter a phase defined as ‘Musth’ in which testosterone levels are high which eventually makes them more aggressive. A male elephant or Tusker in ‘Musth’ is considered even more dangerous!

I find elephants pretty fascinating. Their emotional quotient is high as compared to other animals. It has been studied that elephants grieve their lost ones and sometimes even shed tears! They identify well with their herd and remember loved ones for almost their entire life. 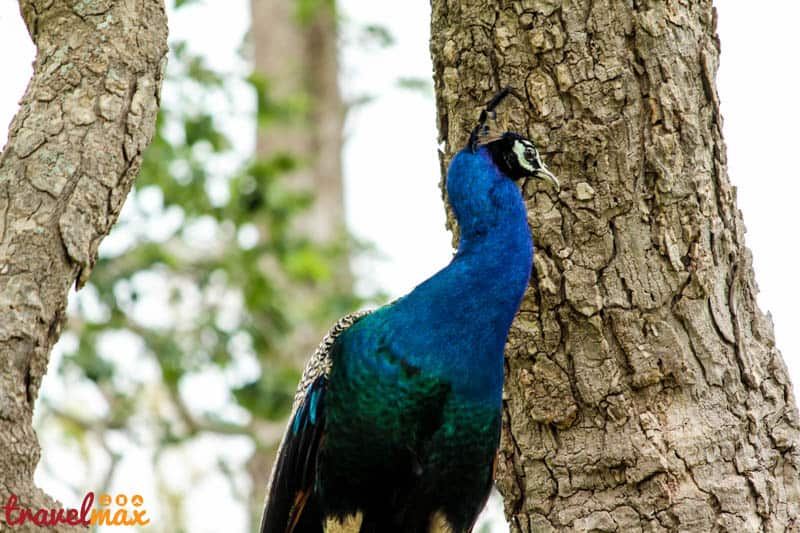 Later that evening, we saw many birds as well. We saw an elegant peacock, a gorgeous eagle, red wing lapwings and many other birds. We also saw Sambaar and quenching thirst from a lake. Such elegant creatures! The whole feeling of being one with nature and venturing in most dense parts of Bandipur national park was just amazing! Everytime I venture in the lap of nature, my heart fills up with joy and a sudden desire to settle somewhere closer seeps in. What a lovely country we have! I always wonder. 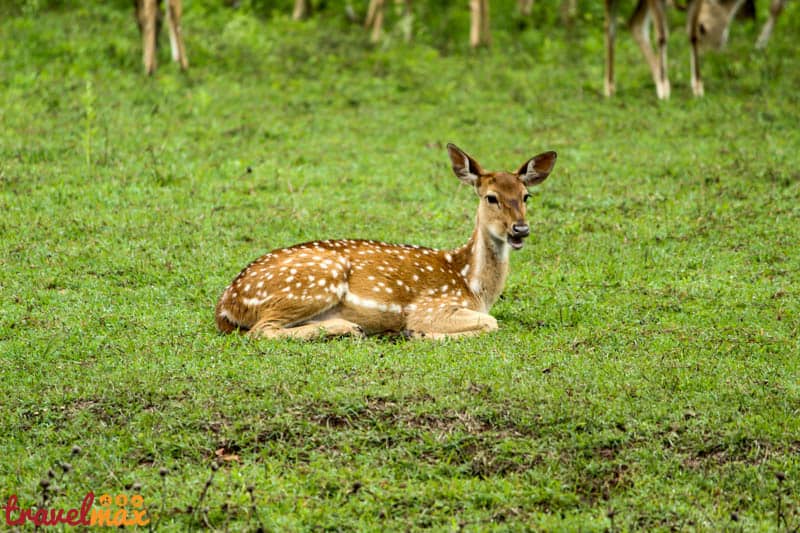 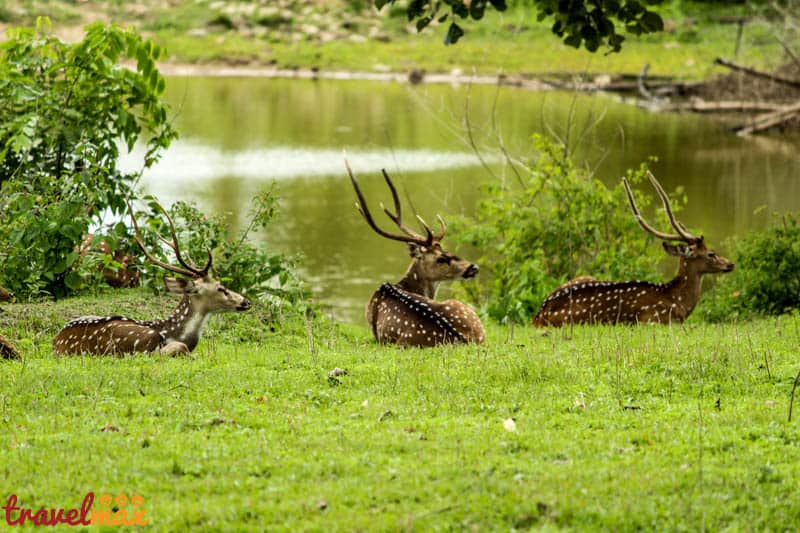 Spotted Deer near a lake 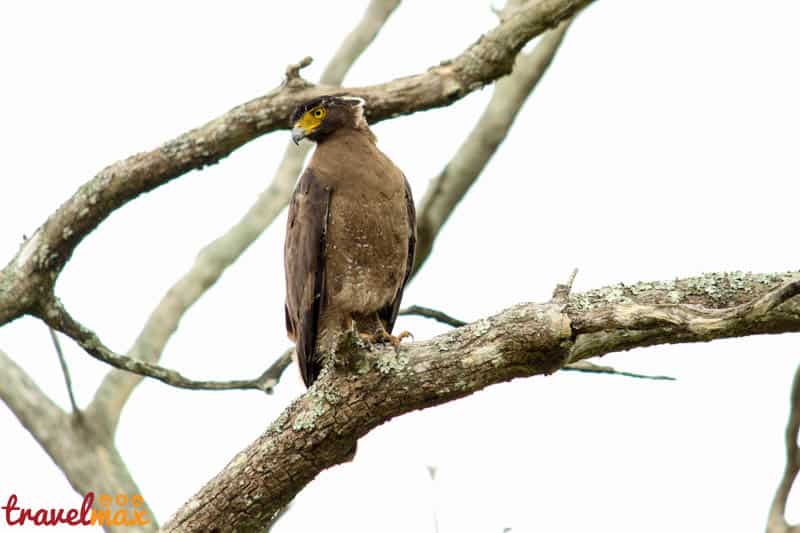 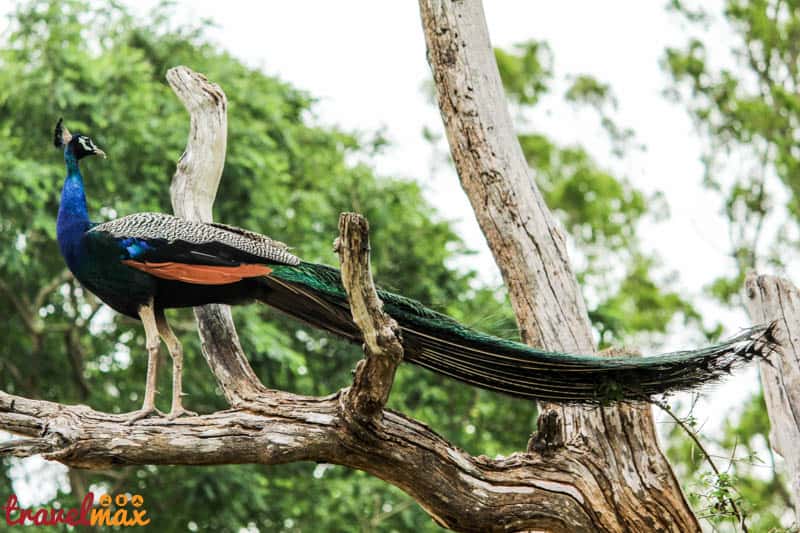 Our evening Safari ended at a high note. We witnessed a herd of deer giving frantic calls. These calls clearly indicate presence of a predator nearby. We waited for 20 minutes but, didn’t see any. But, the 3 hours spent in forest during safari was a lovely time spent with nature in it’s purest form.

In the morning safari next day, the weather was even more stunning! The early morning started with faint showers and gradually the sun started shining brightly! The forest looked stunning in sunlight and it’s beauty blossomed wonderfully. We saw an Eagle swooshing in front of our Jeep and settling atop a tree branch. It stood there scanning for prey as we admired it’s features. 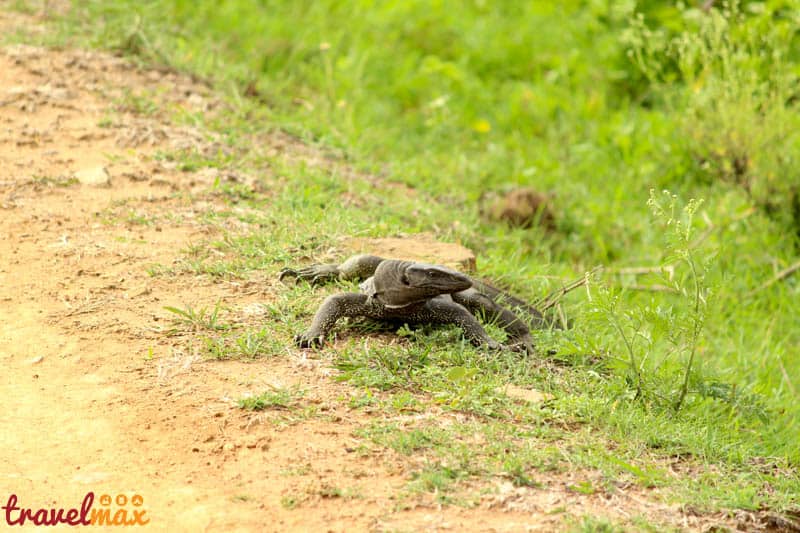 The highlight of our morning safari was spotting a monitor lizard. It looked pretty slick and it’s skin was glowing in sunshine! Flicking it’s forked tongue frequently, it slowly eloped in the bushes. The reptile family is known for flicking tongue frequently which helps them to scan the surrounding air through sensory organs located on the roof of mouth. They rapidly scan the air and slide away in search for a prospective prey. A monitor lizard grows to up to 4 feet! The one which we saw was around 2.5 feet. We also saw a cute little brown hare hopping around in the bushes. 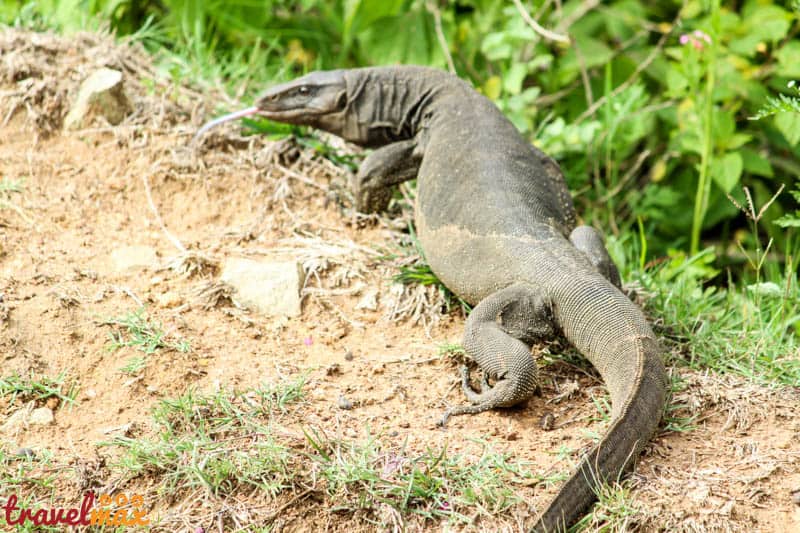 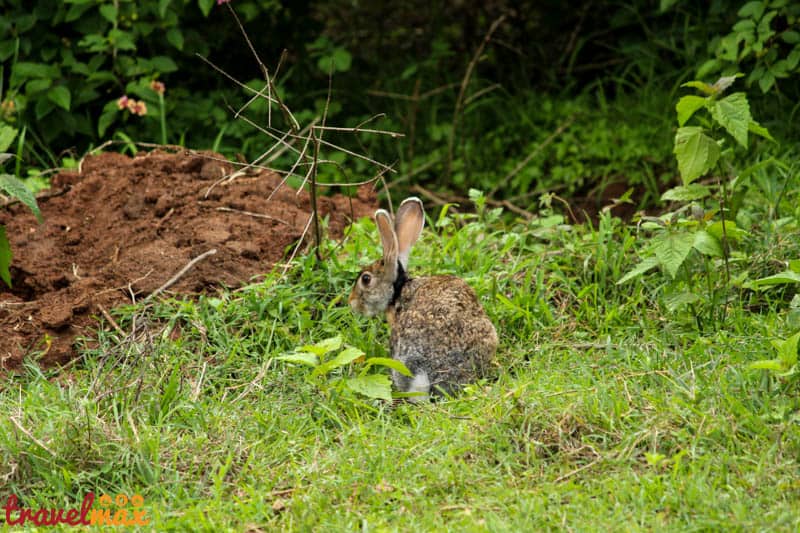 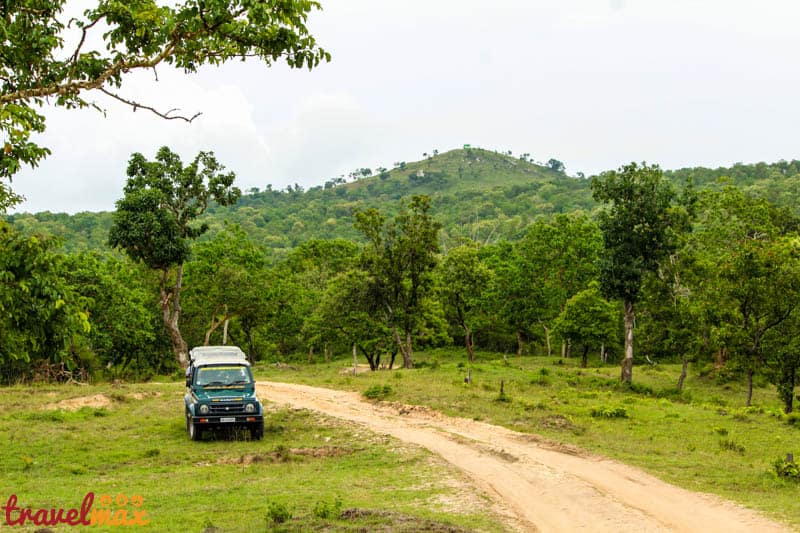 A Safari Jeep in Bandipur national park with a lovely backdrop!

My weekend spent at Bandipur national park was simply fantastic. This was my 3rd tiger reserve and yet the royal predators remained elusive for me. Next, I’m planning for Nagarhole and later Bandhavgarh.

Below, I have answered some questions which might arise while planning a trip to Bandipur national park. Feel free to go through them. You can add your questions in comments below.

Do share your experience if you have visited here before. Did you spot a tiger or leopard? Tell me your story!

Here, I have tried to answer some questions which may arise while planning a trip to Bandipur National park

1) How to reach Bandipur national park?

Bandipur national park is located at a distance of 220 KMs from Bangalore. You can rent a car which was what we did or take a local bus. However, Bandipur doesn’t have a direct bus from Bangalore. But, you can take the bus to Ooty which passes through Bandipur. Ensure the timings are in your favor. Reaching Bandipur National Park late night or early morning might not be recommended as it’s a national park and commercial movement of vehicles might not be allowed. If you prefer trains, you can reach Nanjangud town from Bangalore by train and later take a local bus to reach Bandipur National Park.

2) Where to Stay in Bandipur National park?

3) What are the Safari timings?

For any safari, you need to exit the forest before 6:30 pm. The maximum time allowed is 3 hours.

4) How much does a Bus safari cost

5) Is drinking or smoking allowed?

Drinking & smoking is strictly prohibited within forest limits. It would put the wildlife in danger, create nuisance and spoil the pure air.

6) How much does a Jeep Safari cost if booked individually?

A Jeep Safari costs Rs 3,000 for one Jeep in which maximum 5 people are allowed. So, for two safaris, you would have to pay Rs 1,200 per head. Camera charges are extra.

7) How long does one safari last?

8) Which animals are spotted here?

9) Which is the best season to visit Bandipur National park?

Bandipur national park is open throughout the year, unlike major national parks in India. However, for sighting, summers are considered to be the best as animals tend to move around in search of food, water or shade. The rainy season also has a charm as the rains bring out the forest’s beauty at it’s best!

A Day at Mysore Zoo, what to expect? – Image Gallery

Exploring the Magnificent Spectacles of Hampi

An Avian Affair at Nal Sarovar with...

Hello TRIVEDI,
Thanks for sharing the awesome story with some amazing photos. I will surely love to visit Bandipur National Park during my next tour on India.

Hi Umang, There is no doubt about your traveling but apart travel, You are also a good photographer. I just love all these beautiful wild pictures. I think you know some photography techniques.

Nice, Thanks for sharing , pictures are colorfull

Thank you for posting this. This blog very help full for me this is Ashwini from mysore-one-day-trip-from-mysore

Comprehensive, Crystal clear information about Bandipur. My sincere thanks for enlightened me from your write-up.

Hi Umang,
I had planned to go to Bandipur this week. I was wandering how the national park would be and whether it is clear now after the fire incident there. After reading your article, I am now decided with confidence to visit Bandipur safari.
Your way of narrating the travel experience is awesome.

Thank you for the detailed information.

In bus its cost 350 per person and no animals are there except peacock,I suggest pls dont go bandipur its loss of money thanks

Thanks for sharing the information. In last month, I Visited Alleppey Houseboats
in kerala it’s one of the beautiful experience in my life.