Gir holds a unique spot in every wildlife enthusiast’s list. The density of lions in Gir national park has been increasing year on year due to the diligent efforts of forest department.

Curious about this unique wildlife destination, I visited Gir national park in November month. We stayed at Asiatic lion lodge, an adorable property amidst the dense forest of Gir. Off the highway, some 5 KMs into wilderness, Asiatic lion lodge offered a memorable stay for us while exploring Gir national park. The food was homelike and gardens well landscaped. The slight nip in air made us wrap our arms around elbows. In distant horizon, moon had just started shining, bathing the dimly lit cottages in white light. You can read my detailed experience of staying at Asiatic lion lodge here. 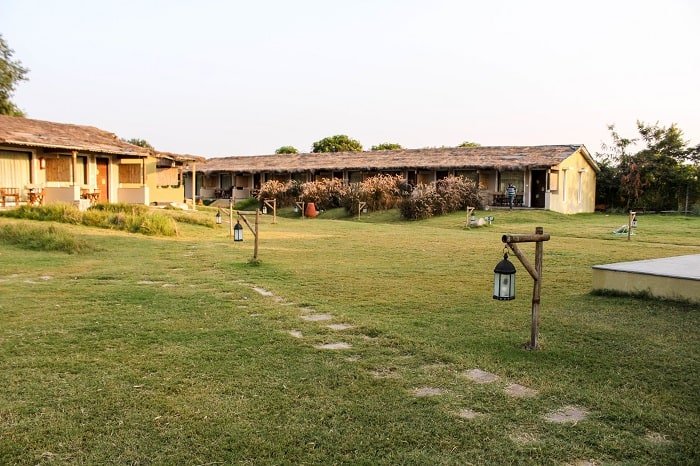 The staff at Asiatic lion lodge helped us book a morning safari and we were on our way to greet the royal Lions. It was 4 am in morning and our open Jeep was en route the forest department office. From there, we would board another Jeep which would take us deep into the forest.

Once the safari permit was issued, we reached the gates a little before 6 AM. The morning safari timing was 6 AM to 9 AM. As soon as the gates opened, the engines roared and the Jeeps started entering the core forest region of Gir national park.

The trodden path was uneven and our Jeeps slowly trudged through. Gradually, we were entering deeper in the forest. Our keen eyes were fixed on the dry trees and twigs scattered on the ground. We curiously scanned the surroundings to catch a glimpse of a lion. 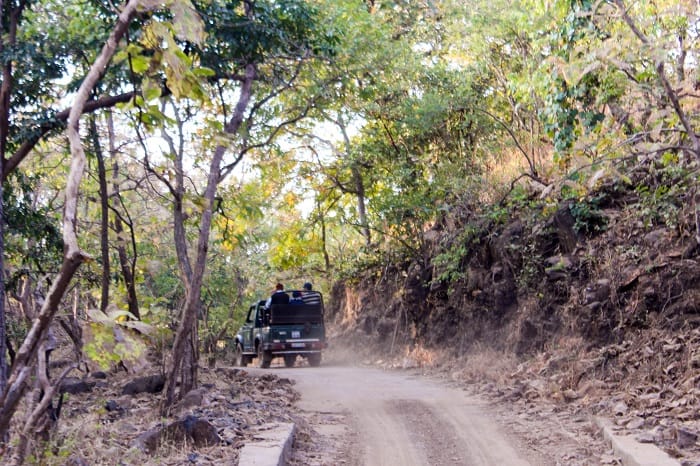 A jeep in Gir national park

Almost an hour passed and with hope in our hearts, we continued to stare at the forest. As the faint sunlight scattered on the ground we heard an engine roaring in distance. Our jeeps stopped and our driver glanced in direction of sound. In the peaceful setup of the forest, an unknown engine was making the only sound.

The sound became clearer and a bike appeared from behind the dense shades. A guy disembarked the bike and approached our Jeeps. Some 20 Jeeps stood in line wondering who was this daredevil walking around amidst Gir forest. Our driver sensed the curiosity in the air and answered our many questions. The guy was not a daredevil but much more than that. He was a caretaker who looks after the well being of lions. This was new for me as I had never heard about them! Their profession was noble and all of them had been serving lions for years. 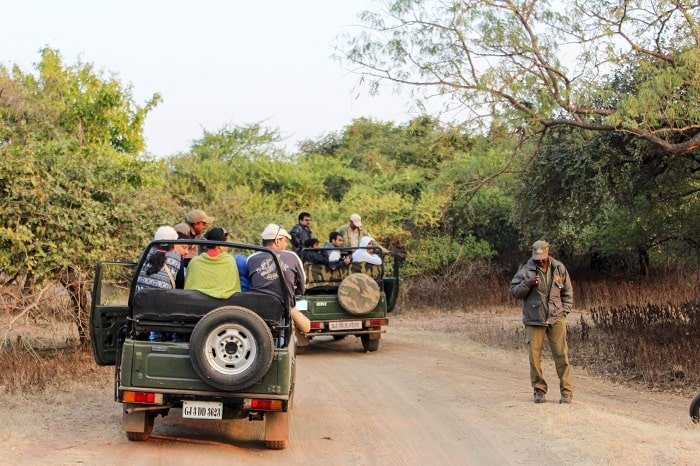 The caretaker standing in style as we wondered who he was!

Due to their uniform, lions recognize them and consider as friends. There are many interesting stories regarding these caretakers. One famous story is how a lion cub approached a caretaker and led him to an ailing lioness. The cub wanted her mother to be rescued by this caretaker! Such unsaid, undefined relationship between caretakers and lions left me awestruck!

Suddenly, we heard a whistling sound. The caretaker, Mohammad, was summoning the lions! All the jeeps had turned off their engines and a pin drop silence enveloped the environment. Mohammad was mimicking a sound made by shepherds while leading cattle. Lions & lioness understand this as the same and head in the sound’s direction, in search of their next prey. However, as lioness assumes the role of hunter more than a lion, chances of spotting a lioness is higher than a lion.

We were on our feet in the Jeep as the whistling continued. 15 minutes had passed since Mohammed started whistling and our hopes had starting fading away. Suddenly, there was a suppressed roar, like that of a cub. They were here!

A lioness walked proudly with 3 cubs playing around cheerfully. Tiny roars filled the environment with joy as the merry cubs frolicked around. Mohammed, with a wide smile on his face, stood nonchalant, observing each step of the lioness. After all, these were wild animals! No matter how well they recognize the caretakers, an unprecedented attack is always imminent. 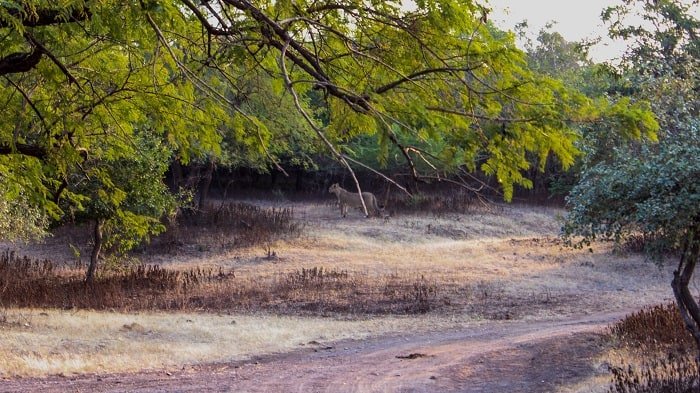 The lioness in distance. It scanned the surroundings for preys before coming closer to our jeeps. I regret not buying a zoom lens before visiting Gir national park!

The lioness slowly, but elegantly approached closer to our jeeps. We stood still as she noticed Mohammed. His smile had grown wider as if he recognized the lioness personally. The lioness sat close to our Jeeps as if allowing us to revel in her marvelous presence. Shutters started clicking and it seemed as if she enjoyed all this attention. The Cubs still fought with grass and plants in the background, not concerned by our presence at all! 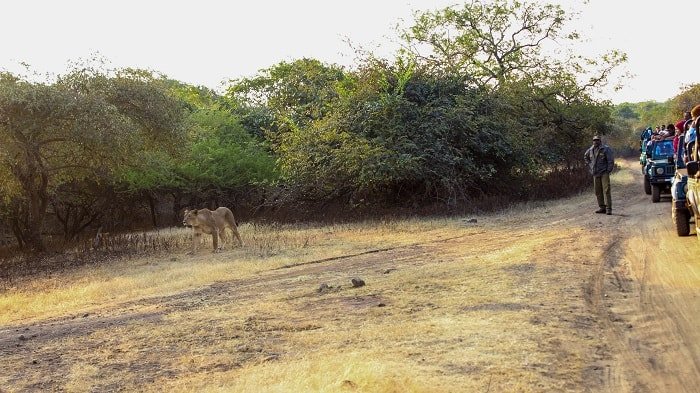 The lioness walked around our jeeps and sat there for sometime

After admiring the elegance of lioness for a while, we later moved further, hoping to catch another sight. But, deep down, I was satisfied to have witnessed the spectacle I wished to!

Apart from the lioness, we saw some deer jumping around gleefully and a fox. We also noticed cottages built right in the middle of the forest, only yards away from where we saw the lioness. They were the Maldhari tribe, settled in the forest for decades. Even after the government declared the forest as Gir National park, they weren’t coerced to leave their abode. Maldhari tribe still continues to live fearlessly with the lions.

However, many incidents have occurred in which a lion hunts their cattle in search of prey. To avenge the loss of cattle, Maldharis catch a deer and poison it. They leave the deer corpse out in open. A lion devours the deer and due to poison, crosses the rainbow bridge too. Due to this, the lion population starting dwindling. To stop this act of vengeance, the government now promises Rs 50,000 to Maldharis for each dead livestock in order to compensate their loss. Due to this government initiative, the population of lions has stopped diminishing further.

After enjoying the blissful morning and an adventurous encounter with lions, we returned to our accommodation. 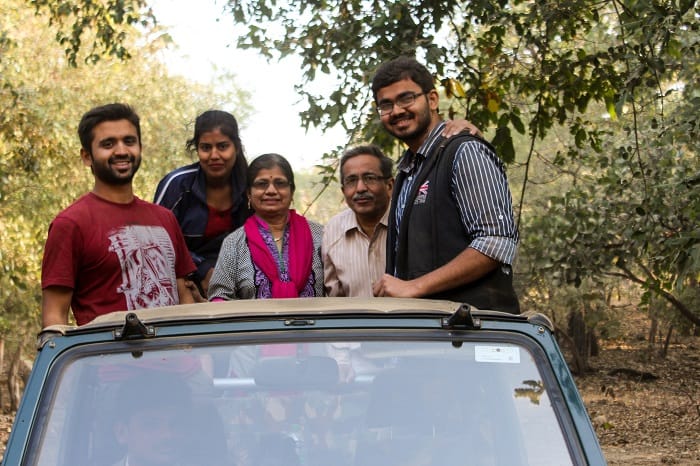 Elated after spotting lions in the morning safari

In evening, we left again to visit Devalia forest park. Unlike the core forest of Gir national park which we explored in morning, Devalia safari park is more of a picnic spot. Gardens welcome you upon entering the park. You can opt for a bus safari which generally lasts for an hour. 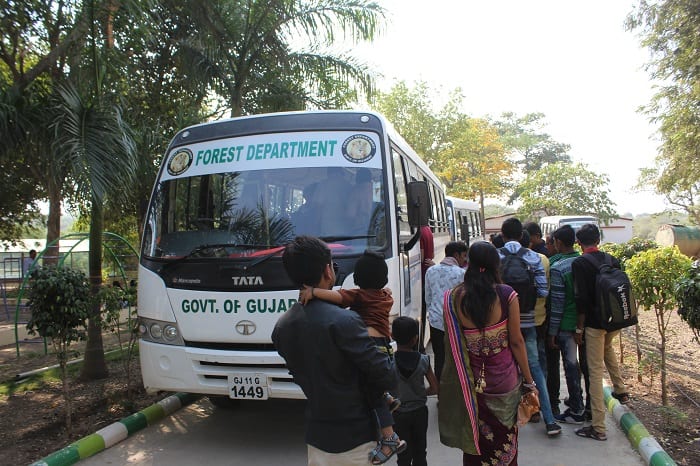 Spotting a lion is guaranteed here because some 20 lions roam around freely in this cordoned area. We also spotted a leopard which was kept in an enclosed area within. Though we spotted the lions well, bus safari in Devalia safari park wasn’t as exciting as the morning jeep safari. You can actually skip it if you had a good sighting during jeep safari. 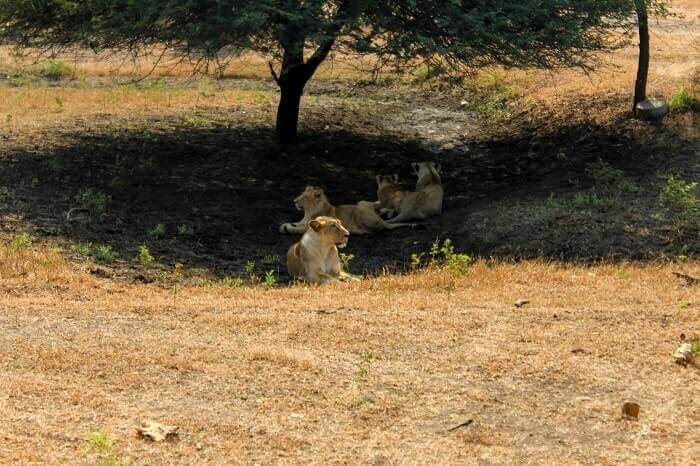 Visiting Gir national park was a fulfilling experience indeed. Meeting the lioness in her natural habitat was just amazing!

I have answered some questions below which might help you while planning for Gir National Park.

How to purchase a permit for Gir National Park & Devalia Safari park?

For Gir national park core forest, department office issues permit for the morning and evening safaris. For visitors, there are two ways to purchase the permit. You can either visit Girlion.in or stand in line at the counter in person. The counter opens a couple of hours before the safari timings. However, people stand in queue well in advance. In peak season, the lines might start forming at midnight for the morning safari!

The online permits tend to be sold out much in advance. I would recommend booking it 2 months in advance. Your accommodation staff can also help you to get the permit. However, they would add their own surcharge.

For Devalia national park also you can purchase the ticket online from the same portal. The over the counter tickets are available easily in person.

How to reach Gir national park?

The nearest major city is Junagadh or Rajkot. You can take public transport to reach Gir from there.

Which is the best season to visit Gir national park?

Summer is the best season to spot lions. The dry forest makes the forest less dense and hot weather makes lions move frequently towards water reserves. However, Gujarat tends to be very warm in summer. So, you can consider visiting Gir national park in winter also. Spotting chances are lesser but still good.

What are the permit charges and timings?

You can get detailed information by visiting girlion.in

Is morning safari better than the evening?

In morning, lions tend to move around in search of a hunt. Given the movement, morning safari generally offers higher probability to spot lions.

I hope you found this blog useful. Have you been to Gir national park? Share your experience with m the in comments section!

Why is travel insurance important for travel enthusiasts?

Ponmudi: A Jewel Hidden in Kerala

Gir National Park is the only single wildlife in India which is popular for Asiatic Lions……. I got new things from this post and Nice blogs with awesome pictures and poses of the Photos. Thank yours for Nice Blog!

I liked this blog which is all over adventurers.
Thank you.