Holi is an ancient Hindu festival and finds its roots in the Indian subcontinent. It is also famously known as the “festival of colours” or the “spring festival”. The Holi festival marks the end of winter and signifies the beginning of spring. The entire celebrations last for a day and night and it starts on the evening of a full moon day in the month of Phalgun (as per Hindu calendar). The celebration conducted on the very first evening is popularly known as “Holika Dahan” or “Chhoti Holi”. The celebrations conducted on the very first day are known as “Dhulandi”, “Rangwali Holi”, “Phagwah” or “Dhuleti”. 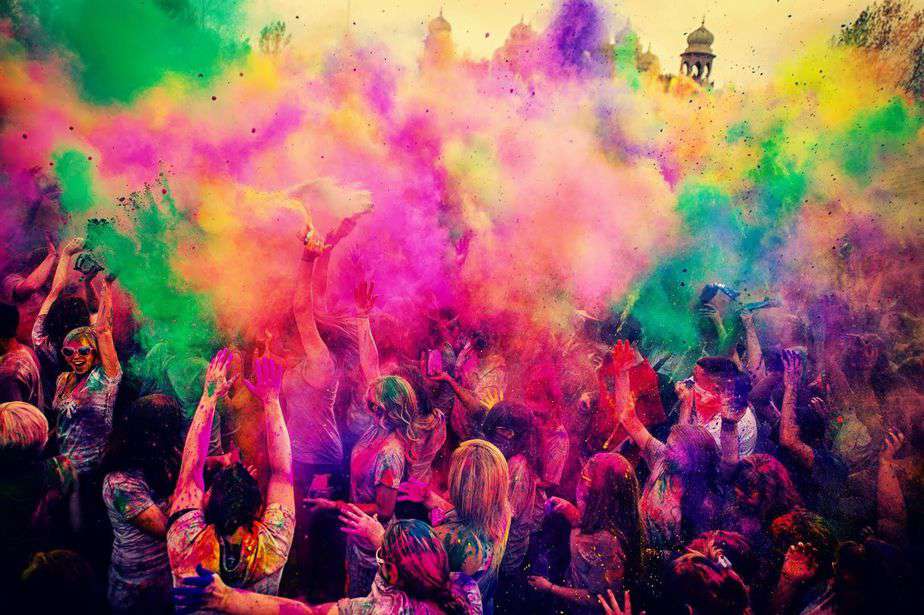 This Hindu festival also marks the victory of good by celebrating the destruction as well as burning of Hindu demoness, Holika. Lord Vishnu had made this victory possible. According to legend, Lord Krishna, in his childhood days, liked to play pranks on the gopis by drenching them in coloured water. Hence this celebration is also known as the “Festival of Colors”. The Holi festival is also celebrated as a spring festival to offer thanksgiving for a very good harvest season. This festival also signifies the immortal love of Lord Krishna and Radha.

Holi is celebrated in different states of India under different names and traditions. However, the spirit of the festival brings everyone together despite the differences.

The history of the Holi festival is quite old and dates back to the Hindu Puranas. This festival has also been mentioned by the great Sanskrit poet, Kalidasa and in many Sanskrit works of literature such as Dasakumara Charita and Ratnavali.

Holi usually marks the victory of Lord Vishnu and his humble and loyal follower Prahlada against the King Hiranyakashipu. This entire encounter is mentioned in the 7th chapter of the Bhagavata Purana. As per the Purana, King Hiranyakashipu was the famous lord of the Asuras and had also received a boon that granted him the following 5 special powers: No animal or human being could kill him, he cannot die indoors or outdoors, he cannot be killed by any Astras or Shastras (Weapons), he cannot die at day or at night and he cannot die on land, water or air. As a result of this boon, Hiranyakashipu became arrogant and began thinking that he was equal to a God and demanded everyone to only worship him. 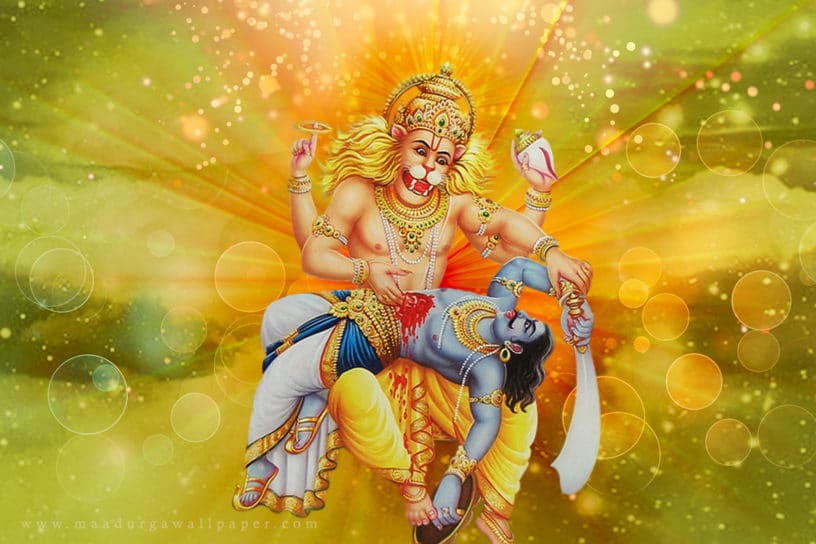 However, Hiranyakashipu’s son Prahlada refused to worship him as he was devoted a single god, Lord Vishnu. This angered Hiranyakashipu and he punished his son cruelly. In the end, Holika, sister of Hiranyakashipu came to help him out. Hiranyakashipu wanted to burn his son as he worshipped only Lord Vishnu. Holika tricked Prahlada to sit on her lap in a pyre with an objective of burning him. However, Lord Vishnu, extremely impressed by Prahlada’s devotion protected him and the evil Holika got burnt in the pyre and was reduced to ashes.

Lord Vishnu took the form of Narasimha to restore balance. In his form as Narasimha, he possessed the body of half-human and half-lion. At dusk, he dragged Hiranyakashipu at his palace doorstep and placed him on his lap. He then killed the evil asura king with his bare hands and thus destroyed evil.

Thus the festival of Holi marks the triumph of good over evil, of Lord Vishnu over King Hiranyakashipu and the death of Holika.

How is Holi Festival Celebrated?

The entire country lights up to celebrate this festive occasion. The entire market places get buzzed up with activities. Heaps and heaps of Gulal (Pink colour) can be seen getting sold on the roadsides. Children, as well as adults, rush to grab their pichkaris (water guns) to drench and colour up everyone. The women of the household too get engaged in different activities such as cooking delicious Indian snacks and sweets for family and friends.

The entire celebration of Holi is divided into two different events: Holika Dahan and Dhulandi. On the eve of Dhulandi, large bonfires are lit to symbolize the burning of Holika, the demoness. This is famously known as Holika Dahan. People conduct different rituals at the pyre and walk around it three times praying for their well-being.

On the day of Dhulandi, the entire day is spent enjoying and partying. People irrespective of their age gather around and play with dry colours and water guns filled with coloured water. Nowadays, people also play with coloured water balloons. It is similar to playing paintball.  During this day, you will find most of the people coloured in different organic colours. Hence, the name “Festival of Colours”. People gather around temples, apartments, and parks and celebrate with vibrant colours, music and bhang (an edible preparation from cannabis). 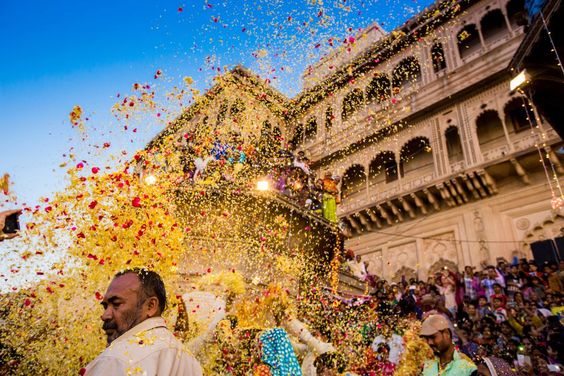 The Holi celebrations of Mathura and Vrindavan are extremely famous throughout the country. Lord Krishna was born in Mathura and he spent most of his childhood days in Vrindavan.  Hence these two places also serve as a tourist as well as pilgrimage attraction.  As per few legends, the tradition of playing with colours started with the Leela of Krishna and Radha. Mathura even holds a very famous show a week before Holi festival. The Dwarkadheesh temple in Mathura is one of the best places to celebrate Holi in Mathura. The Banke Bihari temple in Vrindavan is known for its week-long celebrations. 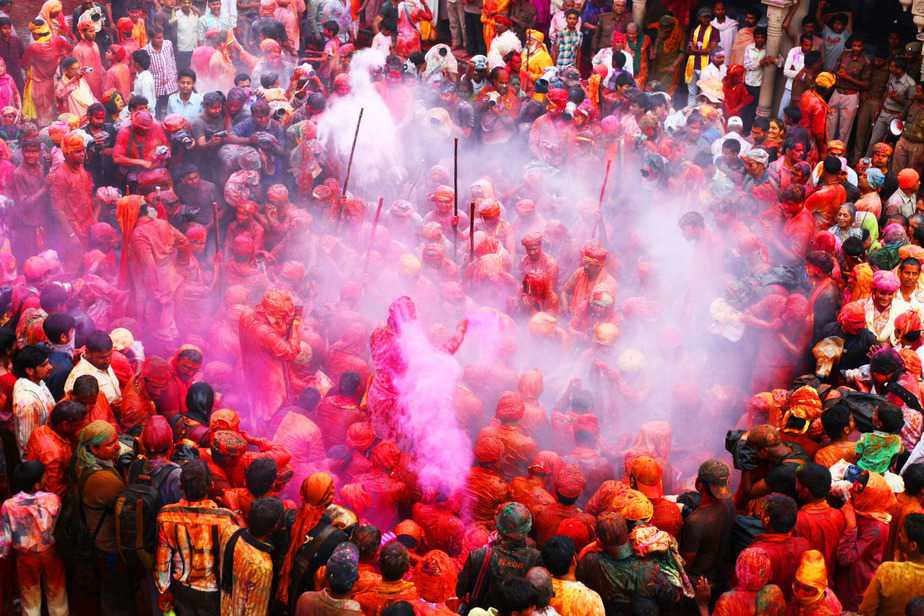 The Lath Mar Holi is very famous in the state of Uttar Pradesh. Barsana is the homeland of Radha. The women of Barsana had chased Krishna away when he went there to tease Radha and her friends. Holi celebrations are quite grand at the Ladliji temple, which is built in the remembrance of Sri Radha Rani. The Lath Mar Holi is quite unique in its own way. The celebrations take place over two days. On the first day, men travel from Nandgaon to Barsana to tease women. The women then chase away the men by hitting them with Lath (sticks). The men protect themselves with shields. On the second day, the women from Barsana travel to Nandgaon to play Holi. 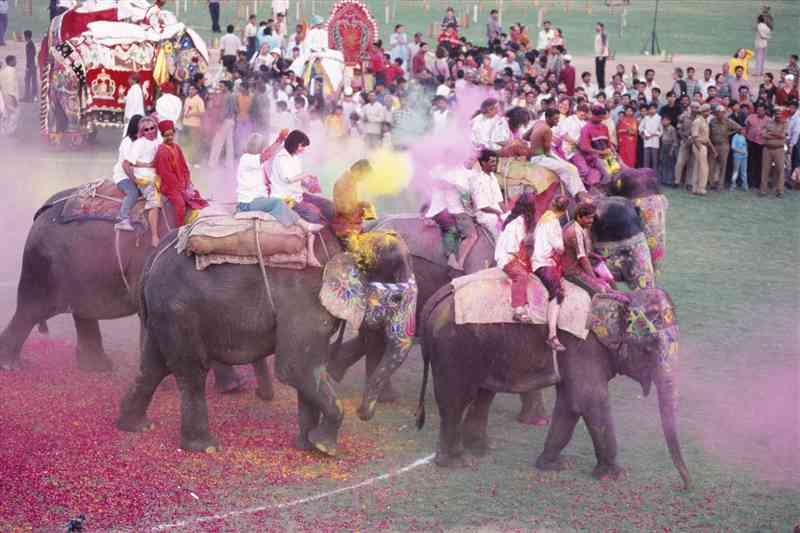 Holi is celebrated quite grandly in the state of Rajasthan which is blessed with a number of royal families. The Holi celebrations last for two days over in Udaipur and Jodhpur. The City Palace in Udaipur hosts the Holika Dahan celebration, which is also one of the most famous tourist attractions in Rajasthan. The custodian of the Mewar dynasty lights the pyre for Holika Dahan. The very next day, the entire streets of Udaipur and Jaipur are filled with Holi celebrations. In Jaipur, the Holi festival kicks start with a huge parade including the elephants, decorated horses and camels and local folks dancing on the streets.

If you are keener on celebrating Holi in an offbeat way, then you need to indulge in all the thrill and excitement that the city of Mumbai has to offer during Holi festival. The city is home to several incredible Holi events that let you immerse in the experience with utmost zeal. The celebrations include DJ sessions and appearances from Bollywood celebrities. This way you can celebrate the festival in an exciting manner. In addition, there are several festivals that let you camp during the night and relish in scrumptious meals by the bonfire.

Dol Jatra is celebrated in the states of Odisha and West Bengal. This event is associated with Hindu God, Lord Krishna. However, the mythology associated with the celebration is slightly different. This festival celebrates the eternal and the divine love expressed by Lord Krishna to his beloved Radha Devi. Processions are held throughout the major cities and idols of Radha and Krishna are carried in decorated palanquins. Devotees can smear the idols with colour and have a fun time with their friends and family. The festivities commence six days before Holi on Phagu Dashami as per Hindu calendar. 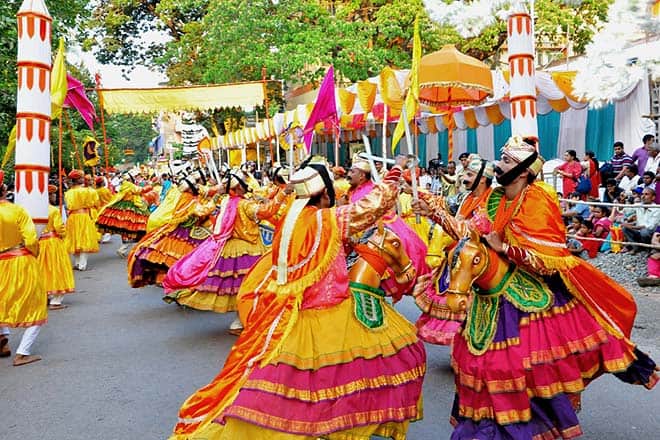 The Shigmo festival in the beach state of Goa is yet another massive spring celebration held during Holi. You can experience traditional street and folk dances by farmers during the event. Tourists have a great time mingling with the locals during this event which is steeped in ritualistic traditions and coincides with the Holi festival celebrated throughout India. Shigmo is basically a village festival celebrated by local artisans and farmers. Men wear colorful attire and perform a warrior dance with a sword and a wooden frame. Hundreds of people experience the extravaganza for hours along the streets. The parades are supported by the local state government. Gulal Utsav is held at the Damodar Temple at Zambaulim in South Goa. Devotees smear gulal on each other during the celebrations.

India is a vibrant destination where every festival is celebrated with great pomp despite the differences. There is unity in diversity in this vast subcontinent of India and you can experience it come alive during the celebrations of Holi festival.

Holi Festival – All You Need to Know About India’s Colourful Festival was last modified: April 28th, 2020 by Umang Trivedi

Best Drinking Games For a Party As per The Whiskypedia

Why I liked Bomdila more than Tawang...

How to reach Chandratal Lake – A...

Historical monuments in Delhi and around |...

A Taste of Adventure & Spice in...

Really This goes far beyond the commenting! It Wrote his thoughts while reading the blog amazingly.
Travelling really can’t be taught; you can learn about other cultures, but you cant be fully taught unless you experience it.
Scientifically, it is shown that travelling also gains you more confidence and a great way to develop cultural sensitivity.
Thanks for sharing with us!! Keep it up!!