The distant clouds were getting darker. In a far off corner of the horizon, we saw rain pouring down from a fluffy cloud. As the gentle waft of wind salvaged us from the afternoon sun, we continued our hike towards the top most vantage point of Rayakottai fort. The view of the green landscape which gradually conjured in front of us was fascinating. How lovely would the 360-degree view from the top be, I wondered. My mind was creating enticing imageries with every step. Boy, was I glad that we planned this trip! 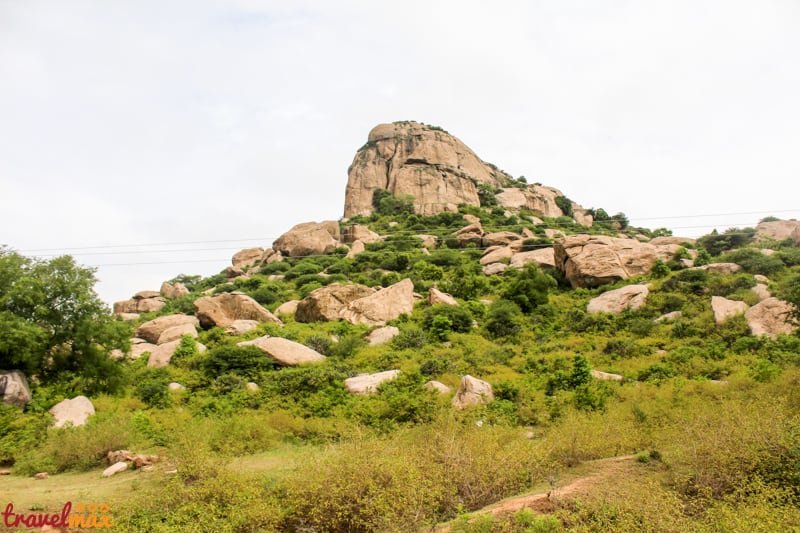 View of Rayakottai Fort from the beginning of trek

Rayakottai fort is one of Tipu Sultan’s lesser known forts. Rayakottai fort is built on a hillock which is higher than any other hillock in the vicinity. This made Rayakottai fort a good vantage point and provided a strategic advantage to Tipu Sultan’s army. Located in Krishnagiri district of Tamil Nadu, Rayakottai fort is at a distance of 75 KMs from Bangalore city. In monsoon, the fort ruins are engulfed by imposing dense foliage. As you scram your way through the dangling plant leaves and protruding twigs, it feels like history and nature are creating a symphony, melodious for the heart. 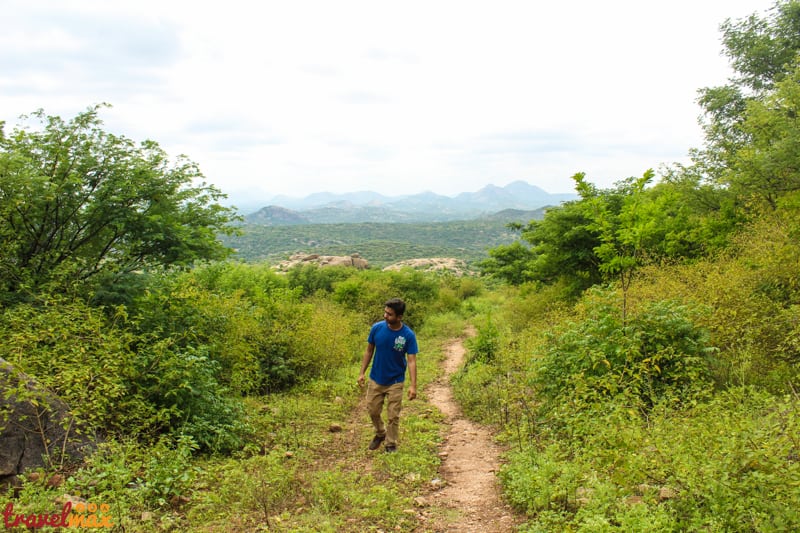 Start of the hike

We started the hike around 10 am after finding a parking spot for our car. Instead of starting from the main entrance, we were directed towards a shortcut by local folks. The initial 1 Km of the hike was a rocky patch, bordered by lush green foliage and dotted by fluttering butterflies. I was surprised to notice myriad species of butterflies, leisurely wandering from one flower to another.

The view of valley while hiking

The hike started to lead us in denser foliage and we discovered some caves which provided a good backdrop for capturing memories on celluloid. We continued our hike to reach a vantage point. The view along the edges of Rayakottai fort looked stunning. The horizon was clear and visibility was good enough to spot a beautiful arrangement of hillocks surrounding a distant lake. The terrain was way more gorgeous than what we had initially expected. 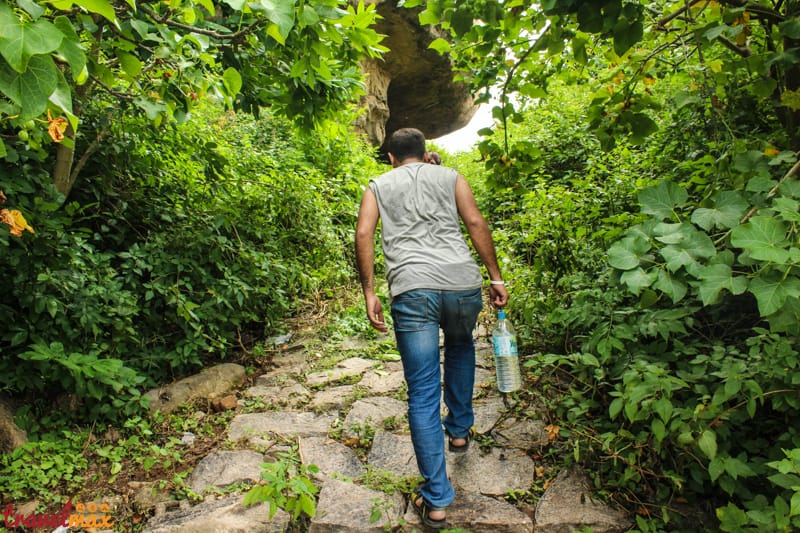 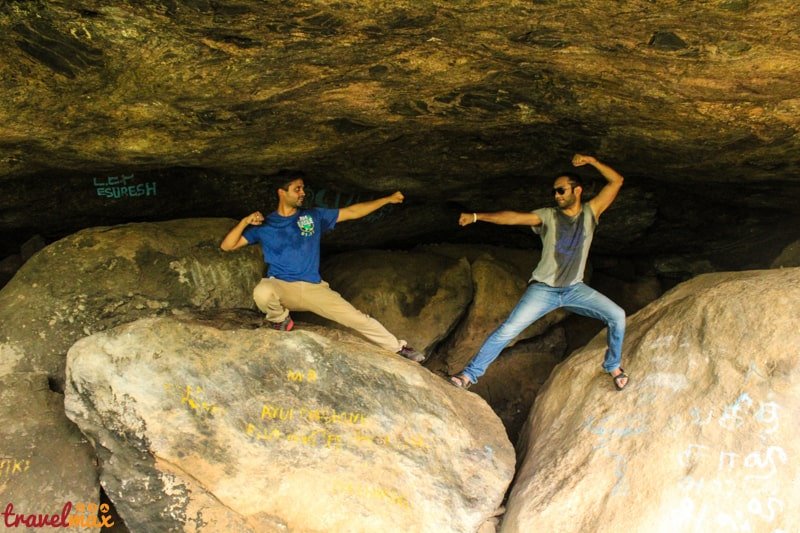 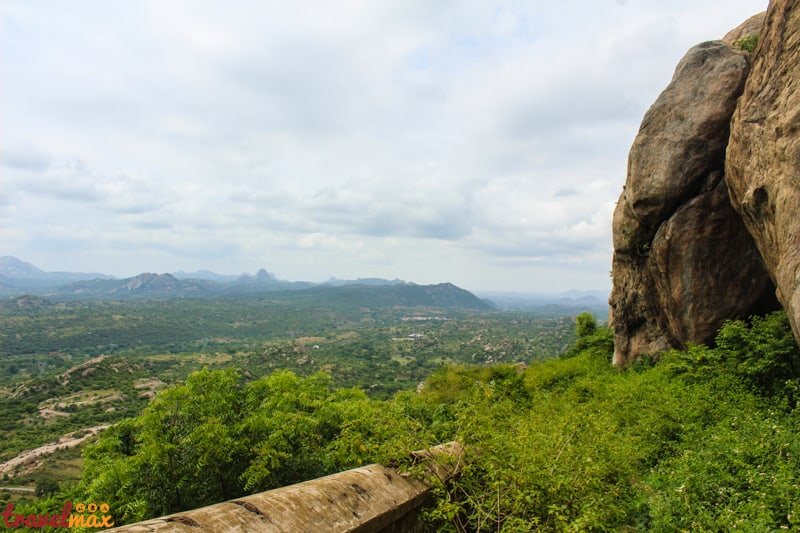 We also noticed a very small pond amidst the fort ruins. A green blanket of algae covered the pond and created a mystic ambiance. We started to walk in direction of the highest vantage point. While navigating our way through boulders and rocks, we were gaining considerable altitude and in another half an hour, we were standing to gaze at the distant horizon and scattered clouds. We spotted a couple of well-camouflaged chameleons who were around a foot long! They were about to get engaged in a fight and moved their necks rapidly as if cheering a rock performance. The gesture is an expression of aggression in chameleons. However, the aggression faded away and we missed witnessing a chameleon fight. 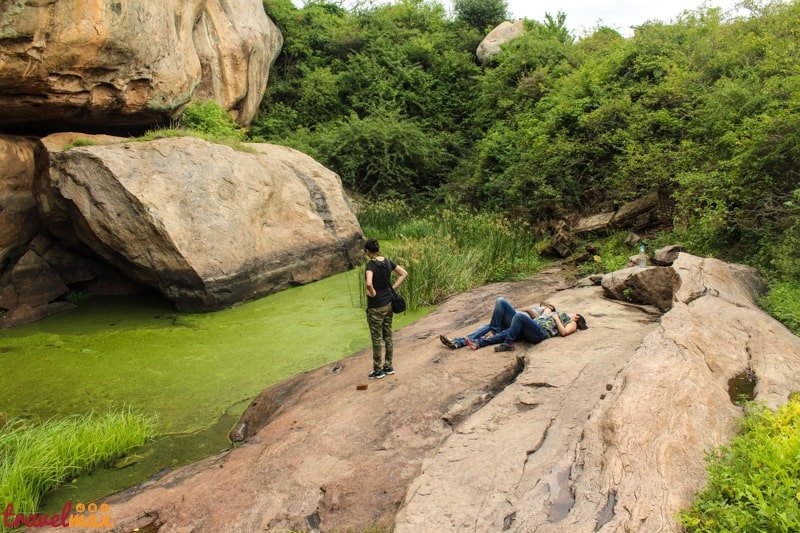 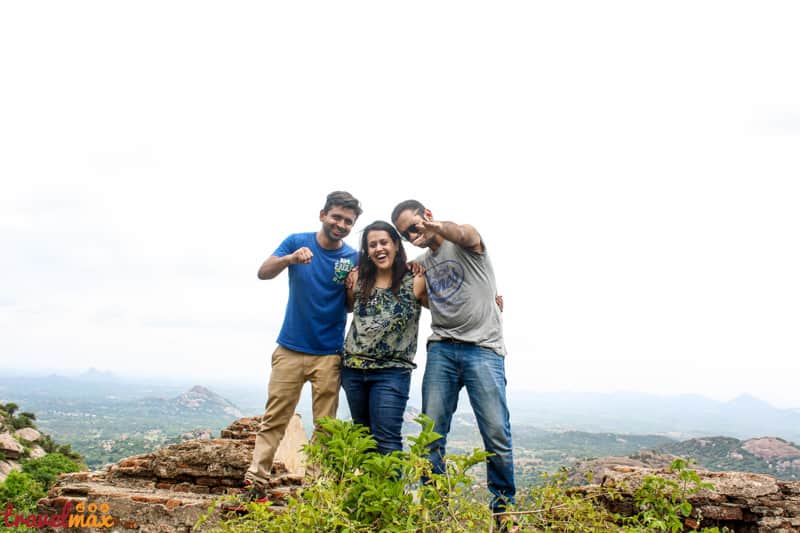 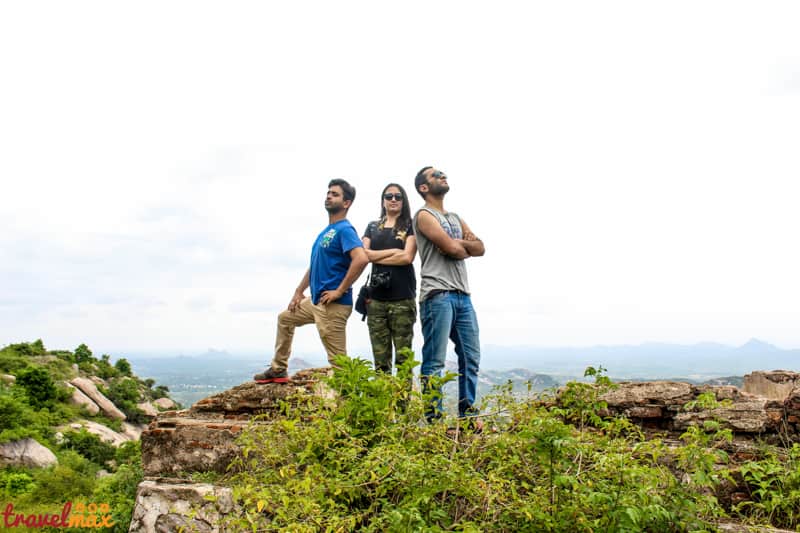 Posing away at a lower vantage point 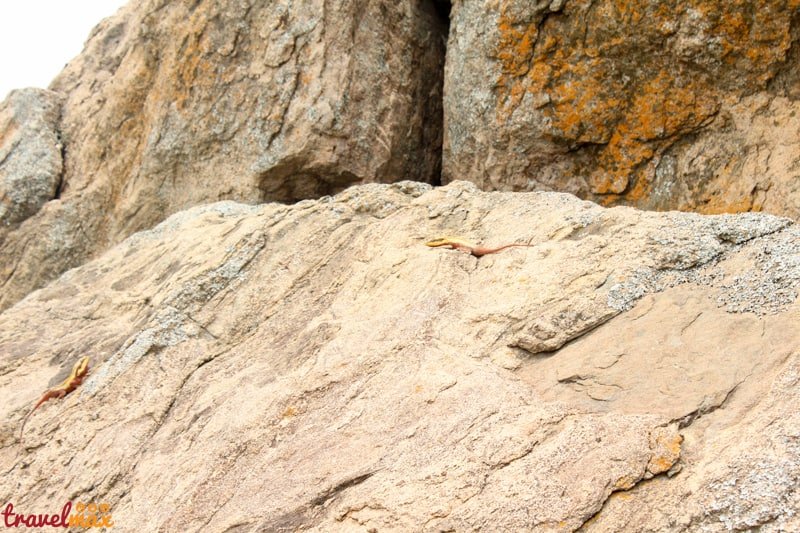 Two chameleons ready to engage in a fight, but they didn’t 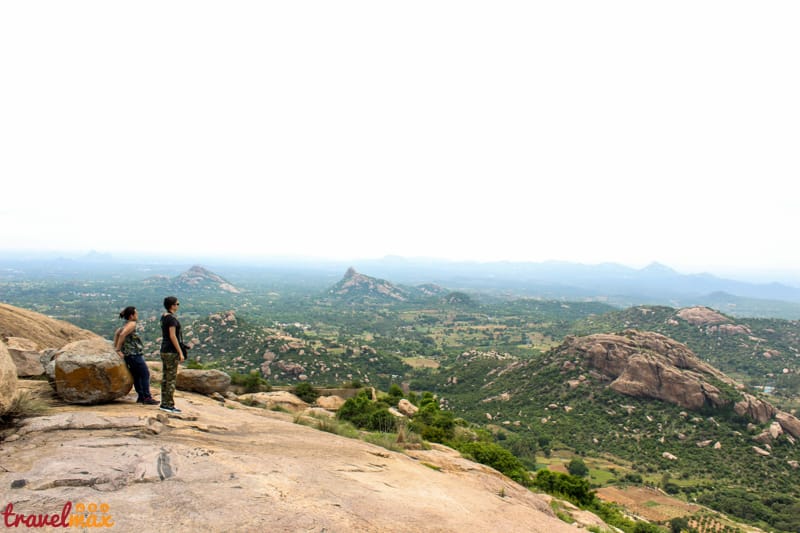 The highest vantage point of Rayakottai fort was still further up. We finally reached up there and reveled in a 360-degree view of the surroundings. The hillock on which Rayakottai fort is built gives the best view as it stands taller than any other hillocks in the vicinity. We saw a railway line spread in a serpentine fashion across the rocky and green terrain below. A puddle in proximity, formed in heart shape looked adorable from the top. In far distant, some dark clouds were one with the horizon which indicated rains. We relaxed for some time on the top, living in the moment, examining the myriad patterns of nature. 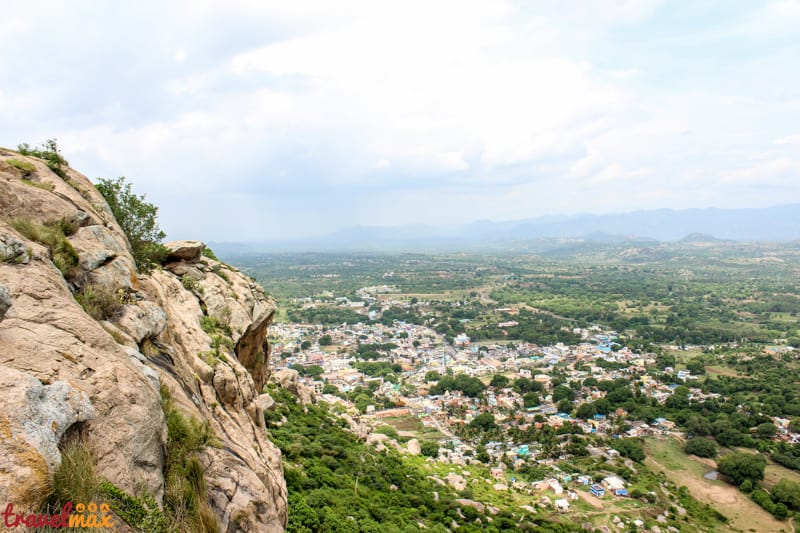 The view of another side while climbing to the top. You can see the Rayakottai village below 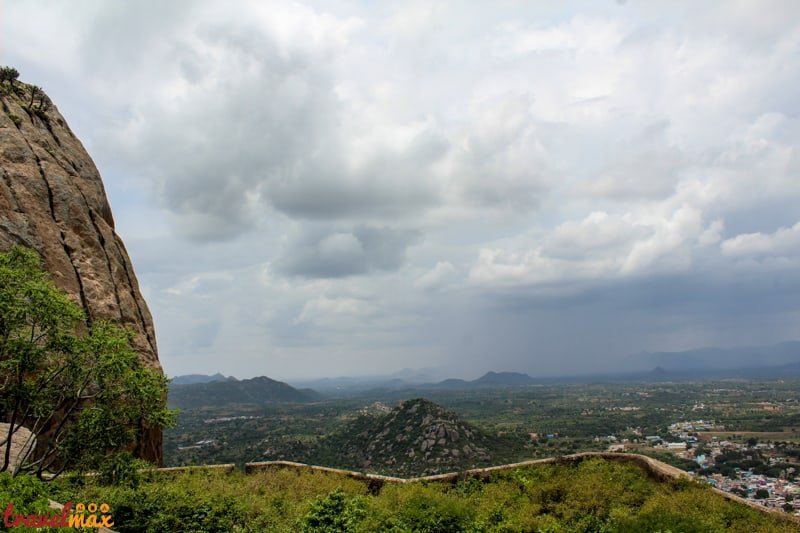 The gorgeous clouds while reaching the top of Rayakottai fort 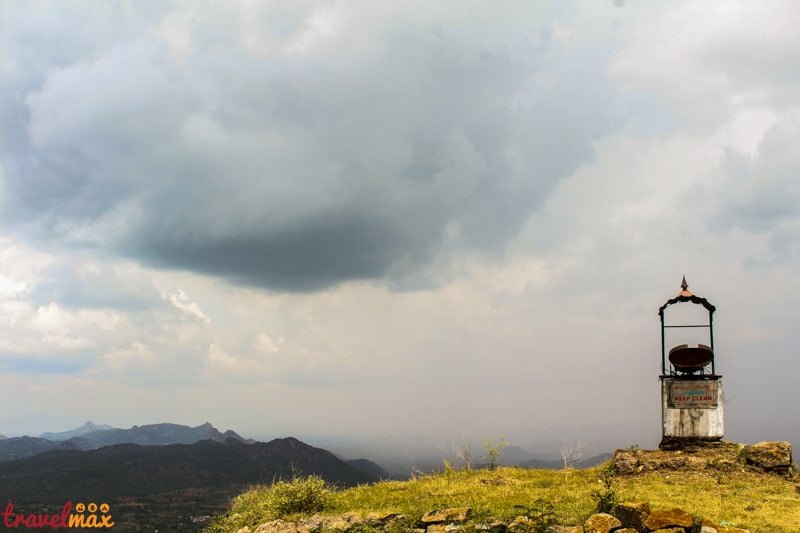 The top of Rayakottai Fort! The object you see is a big lamp which is lit on festivals and special occasions.

The lovely view from the top vantage point of Rayakottai fort

Clouds above us had now overpowered the sun and we started our descent in anticipation of showers. As the droplets started to land on earth, we were halfway through the descent, encountering even more butterflies now. Petrichor filled us with joy as we approached our car.
In some time, we were on our way back to Bangalore and while gaining speed on the highway, we had a last glance of Rayakottai fort, now hazy due to the showers. The fort, though not in its complete, looked imposing from distance and we realized why Tipu Sultan had chosen the hillock in Rayakottai to build his lesser known fort.

It has been a while since I shifted to Bangalore. The city of gardens has been a melting pot of experiences for me. Apart from the Bangalore city attractions, there are plenty of weekend or day trip options in the vicinity. For travel enthusiasts, Bangalore and surrounding destinations offer a lot of places to stay, experiences to cherish and attractions to marvel at. Rayakottai fort is one such worthy attraction to visit from Bangalore and you should definitely plan it sooner than later.

Have you been to Rayakottai Fort before? Do share your experiences in comments below.

Stok Kangri Trek – A Riveting trek with an epic climax

Scuba Diving in Gili Islands – An...

6 Impromptu Travel Ideas for the upcoming...

My Parisian Life – Karishma writes about...

Looks very nice, I want to do it, how safe is it for a solo female traveller?

It’s pretty safe. But, it is a bit isolated so good to have company.

Well detailed and informative article. I am planning to visit this place for trekking, would like to know about any other places to visit and hotel resources for food and snacks.

Hey Umang, was there a safe place to park your vehicle? We are planning to go on bikes. Will that be okay?

I am a travel Lover. Recently i visit kashmir and its really amazing place where you can spend your holidays.