Scuba Diving in Gili Islands – An Experience of Lifetime – (Video Inside)

“One, two…three!” My instructor yelled. With my back facing the vast ocean stretched till the horizon, I was taking deep breaths before the instructor asked us to let our body fall back. Shoulders first, I plunged in the ocean, my head and later the entire body plunged into the turquoise waters. For a split second, before resurfacing, I saw a glimpse of the world that awaited me. A completely different world of sneaky shrimps and lazy turtles, shrewd sharks and curious goldfish, pale green algae and artsy corals! A world which makes you as curious as a child.

The second I resurfaced, I tried to process what I saw. The various patterns of color pacing around underwater in unison with the waves offered a breathtaking view! One short glimpse made me exuberant and the fact that I was going to explore this new world for 40 minutes made my heart beat faster! 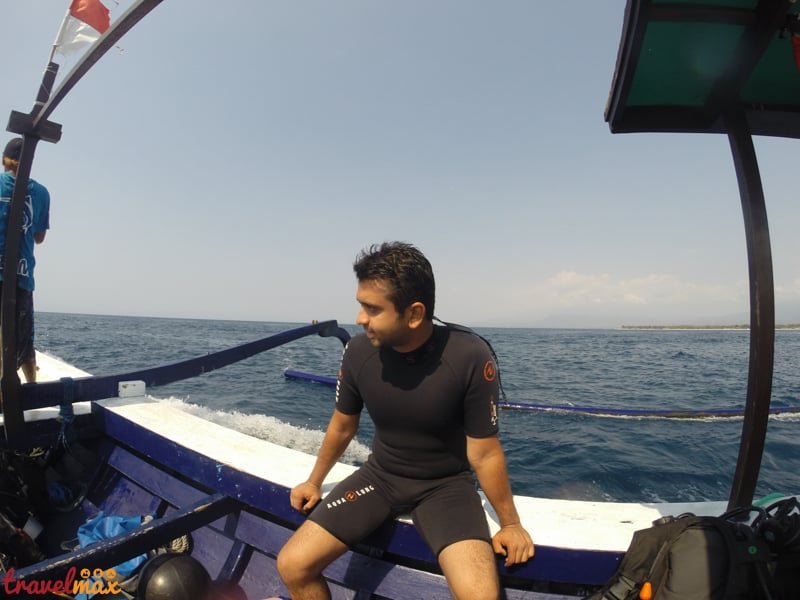 While going to the diving site

Being a non swimmer. I was always skeptical of Deep Sea Diving. But, the thrill and adventure of discovering a new world equally enticed me. I am not hydrophobic. But, I had visited Thailand and had skipped scuba diving. “What if I need to swim away from sharks?” I thought.

The day I reached Gili Islands in Indonesia, my skepticism towards Scuba diving had vanished by discovering the magnificent oceans! The sublime blue waters made me decide in favor of Scuba Diving. I wanted to see what lays beneath the surface of the calm and serene ocean! What if I can’t swim! I didn’t want to miss seeing a whole new world again!

It was time for our dive now. My instructor yelled while giving us final instructions. It was time to revise the signs we had learnt while training. He signaled the ‘OK’ sign and slowly indicated to lower down in the vast ocean.

In a matter of seconds, I was staring at a sight which would be difficult to forget. The sunlight was weak. It was impossible to measure the depth that lay below us. A school of fish swam right across our face. Orange, white, yellow, red all the colors were exuberantly visible. The pale green colored coral illuminated slightly as the faint sun beams bounced off it’s surface. Our existence seemed tiny as the sounds were filtered to only heavy breaths. We started swimming further in the ocean while cautiously entering further depths of ocean. 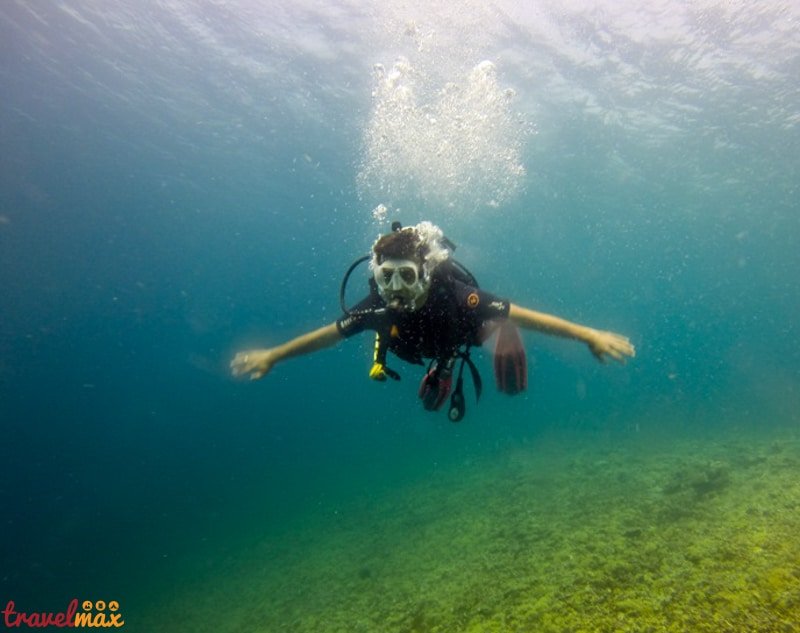 Gradually I saw water entering my mask. The water level was gradually rising which wasn’t a good thing at all! I tried to snort the water out which lead to even more water gushing in! I started waving my hands underwater to signal my instructor, something was wrong.

As I made frantic efforts to catch my instructor’s attention, I could see the water level rising in my eye mask. Finally I realized that my instructor was staring at me, trying to gauge the situation. I saw a hazy figure of my instructor making unfathomable hand signs. I guessed he was pointing towards his mouth. I pressed my fingers on forehead and prepared to lean back. As taught in training, this was the method to evacuate water from my mask. As soon as I threw my head backwards with fingers on forehead, more water gushed in the mask, now almost zeroing my visibility. The hazy figure became even more unclear. Everything was unclear now! I had lost my vision underwater.

I took a deep breath again. The water level had now reached it’s full. I couldn’t see or breathe. Darkness started surrounding me. My heart was beating faster than ever! I felt unbearable weight on my chest and shoulders. It was a moment of panic!

My train of thoughts about surviving was broken by a solid grip on my right shoulder. In the state of panic, I didn’t notice my instructor swimming towards me and grabbing the shoulder strap of my oxygen cylinder bag. I came back to my senses once my eyes squinted due to the bright sun. I was alive! I was floating on the surface again!

Was I that close to death? Of course not! I was surely affected by the sudden change of environment and due to nervousness, I panicked. Once we were on the surface, my instructor explained what went wrong. I was breathing from my nose and not mouth. The trick to not let water enter the mask is to breathe by mouth. Breathing by nose caused vacuum which sucked water in.

Well, now that I had learnt my lesson, we again submerged ourselves under water. My instructor held my arm to ensure I don’t panic again. After a while, he let go of me and I swam freely 18 meters under the surface. If I had one word to explain my feelings, it would be ‘exuberance’! 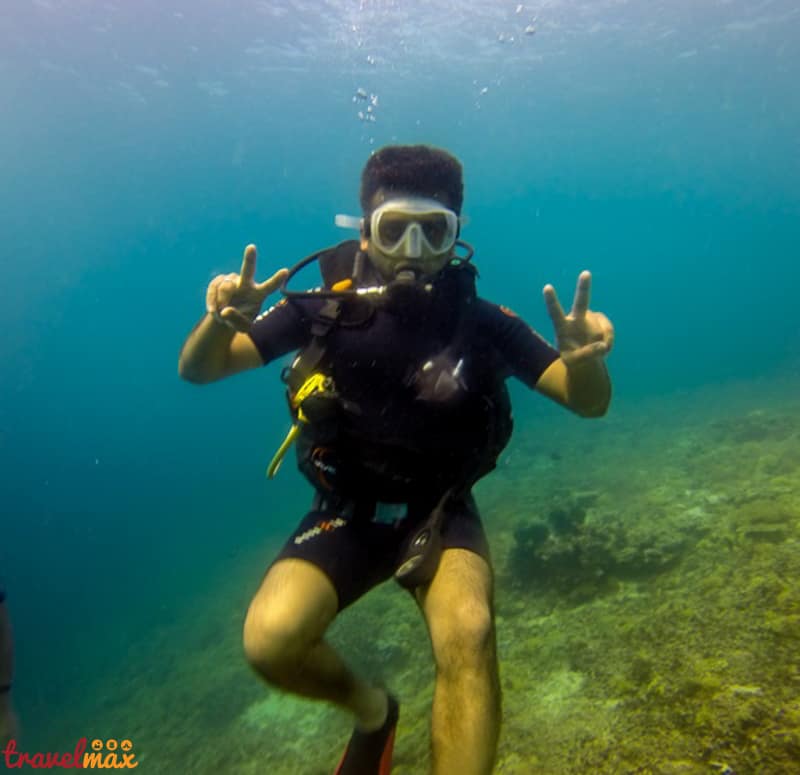 I was finally ready to swim deeper 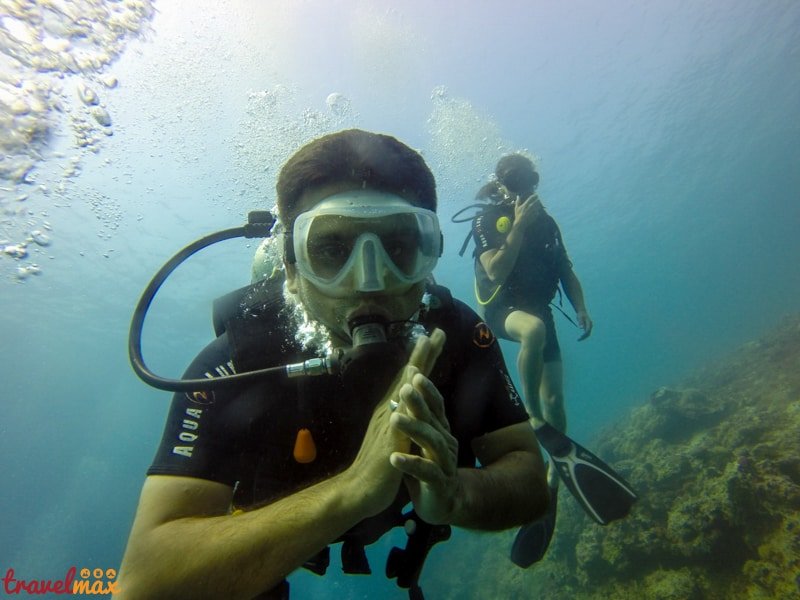 The mild sunshine was now giving comfort in the otherwise dark ocean. We saw multicolored fish shying away from us. The coral reef was looking stunning through the ripples caused by our movements. Suddenly we saw a turtle resting on the corals. Sensing us, he started swimming away as to find solace in the vast waters. We saw sea plants swaying magnificently with the waves. We also found Nemo who was too shy to face us for a long time. Far away in the distance, we saw a vague figure of a shark. “They wouldn’t come to where we’ll swim” our instructor had mentioned. 30 minutes of experiencing the underwater world and liberation from monotony might have been the best minutes to cherish for life. I was now comfortable enough to enjoy nature’s beauty in a different dimension. I was now comfortable to realize how surreal nature can be!

Have a look at some pics below. To know more you can read this article about exploring Gili’s underwater world 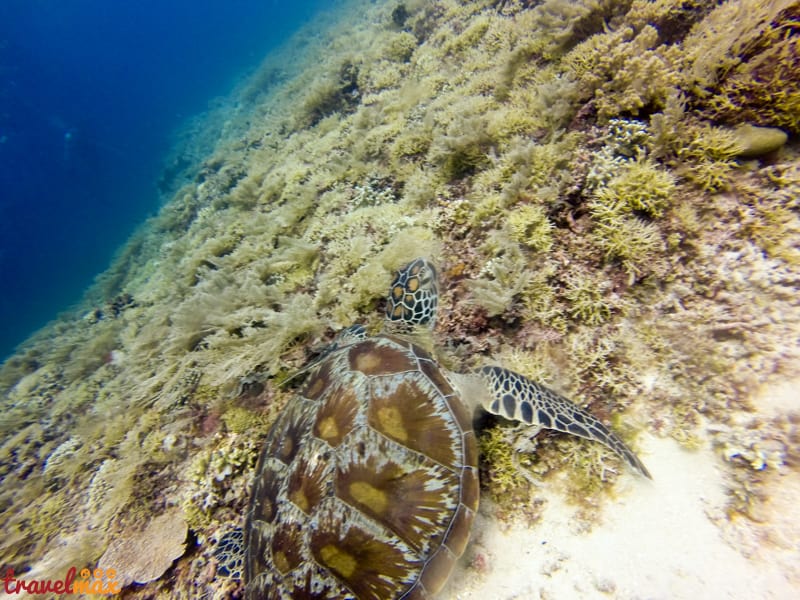 The turtle we saw underwater! 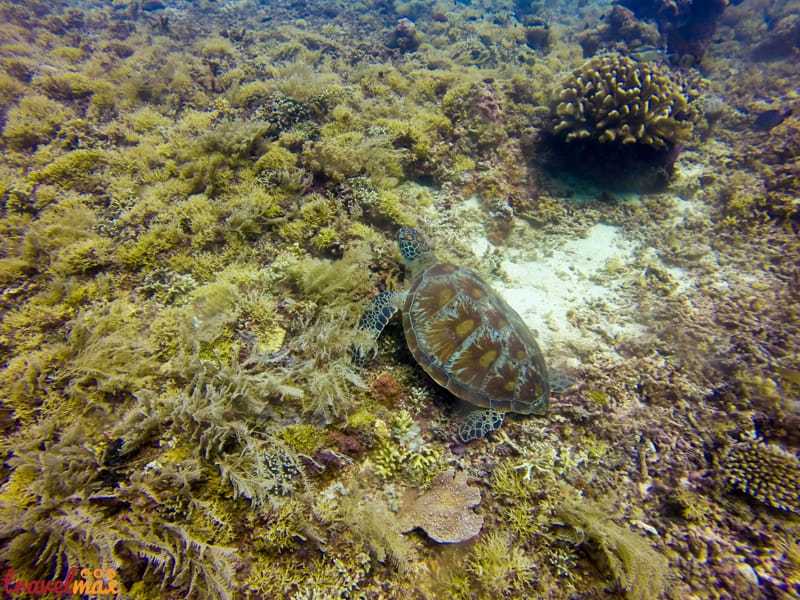 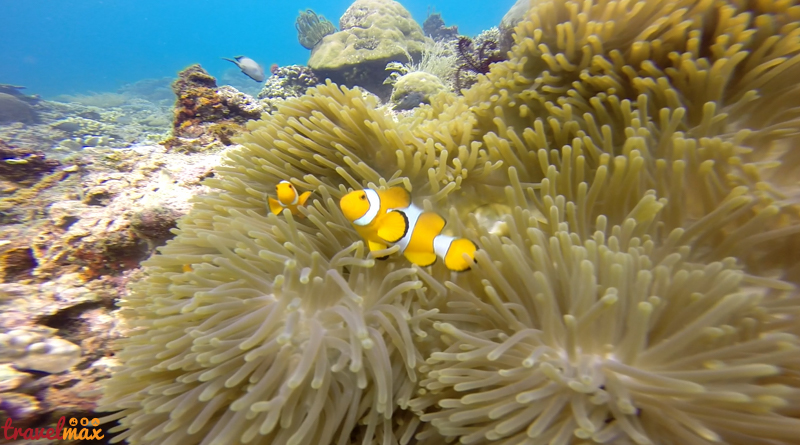 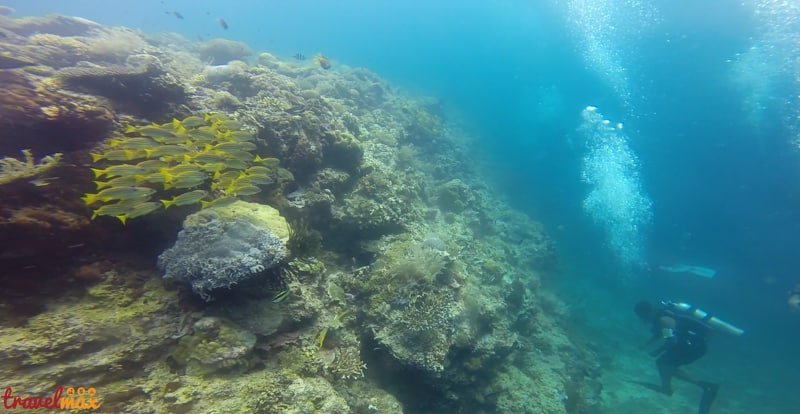 Other divers and a school of fish!

We surfaced back after an overwhelming dive. The real world looked dull and colorless. But, when you return from such a wonderful world of sea dwellers, anything might have looked lackluster.

Reminiscing about our amazing time under ocean, I sat on the side rail of our boat as it sailed through the calm waters. I was leaving back an experience of a lifetime. I had just created an unforgettable memory. I had realized a new found respect for nature. I felt rediscovered!

Here’s a short video about my Scuba Diving in Gili Islands.

Hope you liked the post. Should you have any questions, let me know in the comments. Also, if you have experienced Scuba diving, I’m all ears!

Scuba Diving in Gili Islands – An Experience of Lifetime – (Video Inside) was last modified: January 30th, 2020 by Umang Trivedi

Coramandel Peninsula – A Road Trip in...

Bandung – Exploring a Lovely Destination in...

Get to know the wonderful Dudhsagar waterfall...

Dandeli River Rafting – Traversing through the...

Sainj Valley, Himachal – Everything that you...

Hi,
Nice write-up. I thought you couldn’t go SCUBA diving without a PADI certification. Looks like you did anyway!
Are there many options like these available? Plus, do the guides offer to take you if you aren’t confident under water.

i have fobia of scuba diving..can u suggest me how can i do it?

Thanks bro,
I really like to do Scuba diving but i can’t afford it i saving my money for making my first scuba dive.

[…] is known for Scuba Diving and snorkeling. Snorkel under the blue waters at a cheap fare of $6.74. You will witness something […]