Wagah border certainly rings a bell among Indians. But, just to re-iterate, Wagah border is the India-Pakistan border, situated in Punjab. Located at a distance of 28 KMs from Amritsar, Wagah border attracts thousands of visitors everyday .

The flag lowering ceremony takes place at the Wagah Border gate everyday. Here, I am sharing my experience when I amalgamated with the huge crowd and cheered for India! I still remember the patriotic feelings rushing through me as the BSF soldiers performed their daily duty.

I seek unique experiences through my travels and Wagah border did not disappoint me. The sheer magnitude of enthusiasm which Indians exhibit at Wagah Border was beyond my comprehension and above my expectations. The enthusiastic cheers echoed in the vibrant environment. When we hired a cab to reach Wagah Border to Amritsar, I had no idea how overwhelming the next couple of hours were going to be. 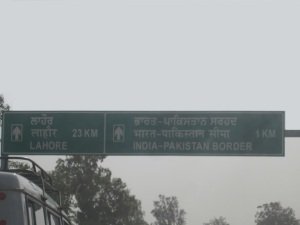 On the way to Wagah Border

When we reached Wagah Border, we saw a never ending line. People across all states, religions & cultures had accumulated here and were waiting for security clearance. As the massive line moved forward, the heat was turning up it’s wrath. We perspired and covered our face with towel to shield ourselves from the excruciatingly hot winds. As we were checked thoroughly and given security clearance, the temperature reading was 48 degree celsius! 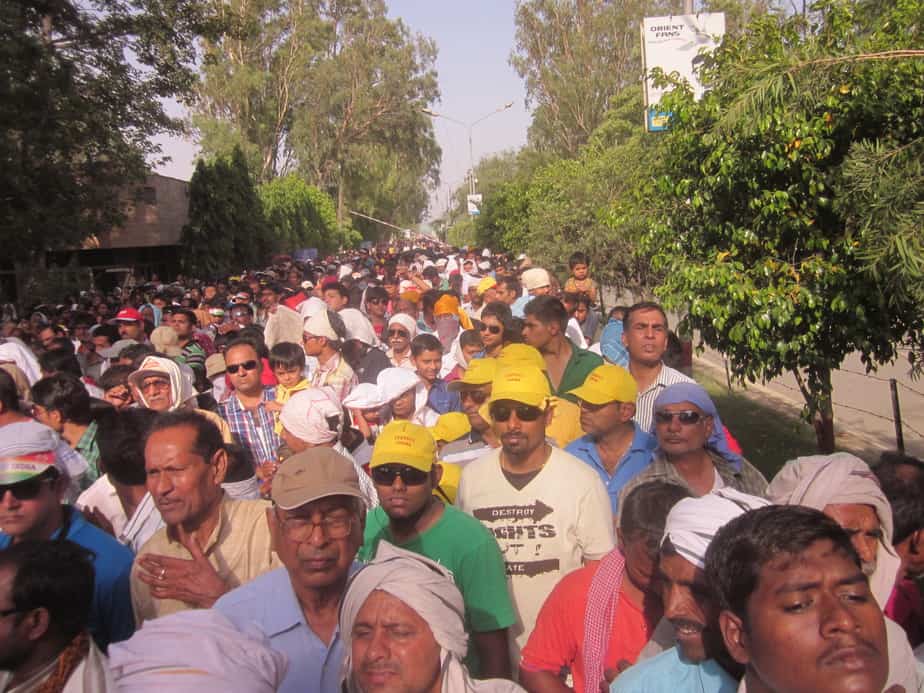 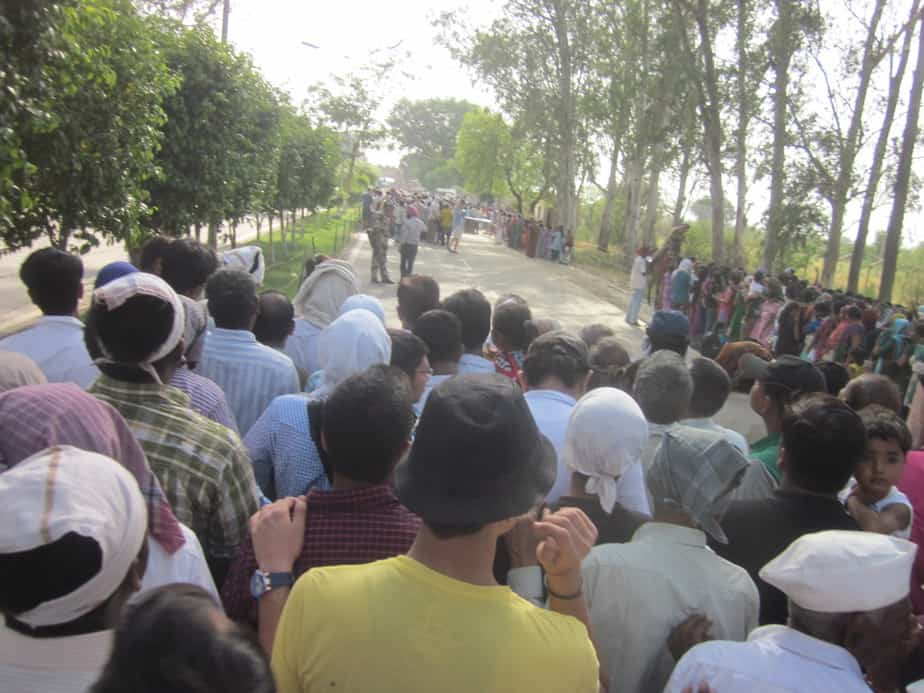 Even after security, the line moved at a negligible pace. With heavily guarded lanes, there was limited scope for the crowd to misbehave. Had the soldiers not been strict, stampedes would have been a common occurrence here!

It took us 1.5 hours to move along with the line and finally find a seat in the stadium. There were thousands and thousands of heads turned towards the Wagah Border gate. The crowd at Pakistan’s side was minimal compared to Indian crowd. There was a coach who directed the Indian crowd to cheer. Sounds like “Hindustan Zindabaad” and “Bharat Mata ki Jai” echoed in the space. The pakistani counterpart also tried to provoke the pakistanis to cheer. But, the magnitude of their volume was like a fart in a hurricane.

Before the flag lowering ceremony started, some girls and ladies were invited to carry the flag and run to the border gate and back. Many others were invited to dance in festivity as the patriotic music filled the air. I noticed a group of Gujaratis performing garba along with Punjabis dancing on Bhangra music. The scene was truly depicting India’s unity in diversity. 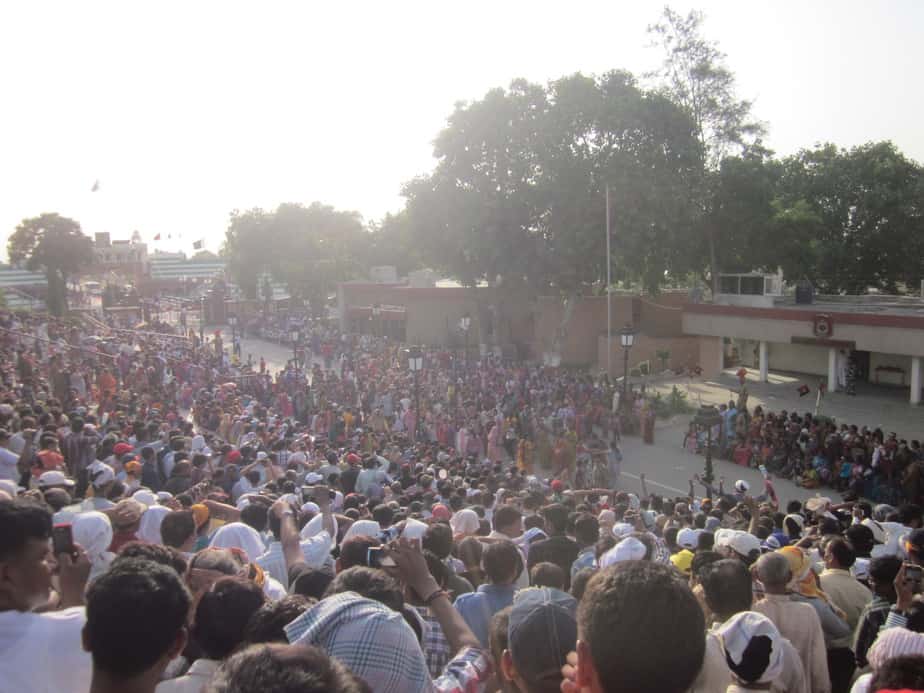 After 1 hour of festivities, the ceremony started. The BSF soldiers stood in attention waiting for instructions. As they followed the instructions, the crowd kept chanting patriotic slogans. The strength of pakistanis had now increased and their shouts were now audible. But, their every shout was retaliated by a stronger cheer from Indians. The atmosphere was electrified and intense! I surely got goosebumps!! 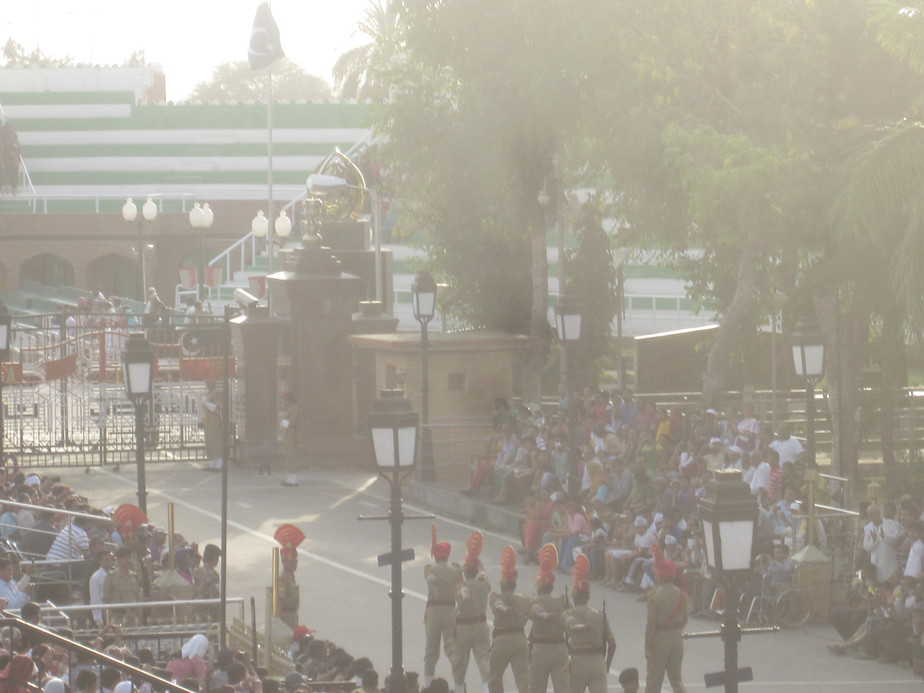 The BSF soldiers ready for the Wagah Border ceremony 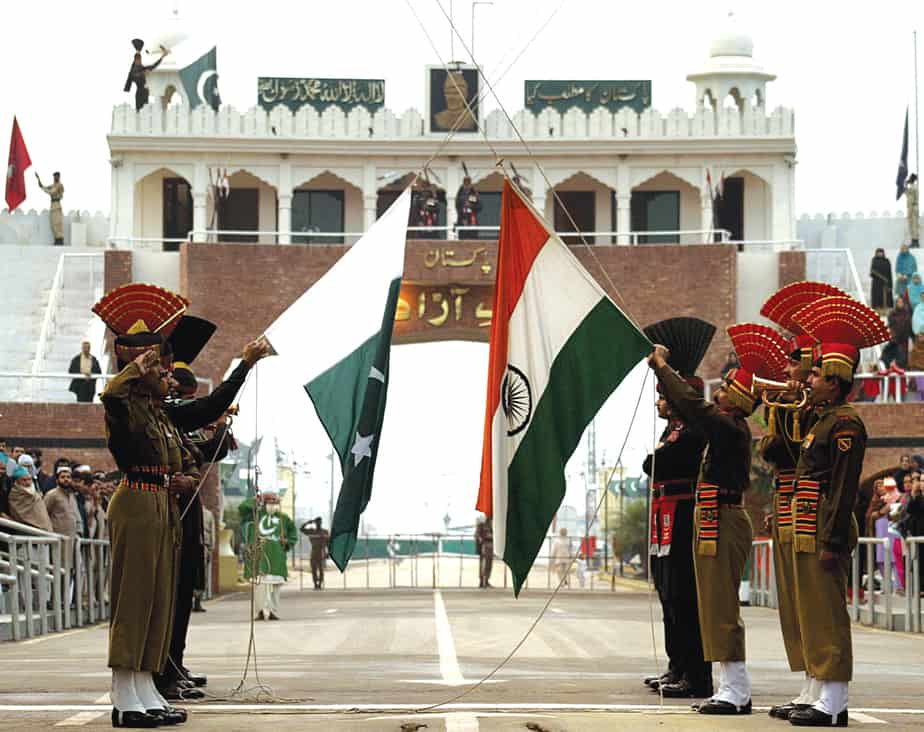 The whole ceremony took around one hour. Both the flags were now lowered and the soldiers shook hands firmly. The show was finally over and the crowd started dissipating.

Everyday, the Wagah Border ceremony attracts lakhs of tourists, both Indian and foreigners. This ceremony has been named as “Carefully Choreographed Contempt” by Michael Palin. I would surely recommend a visit to Wagah Border. Not for anything else but for being a part of skyrocketing exuberance exhibited by both the nations.

I have compiled some quick tips which you would find useful if you plan to visit Wagah Border.

2) You can hire a cab, shared or individual to reach Wagah Border. To get a good seat, I recommend reaching Wagah Border by 2 pm. If you delay reaching here, you might have to wait for maybe 2 hours to even enter the stadium near Wagah Border gate

3) VIP arrangements are made for people who know somebody in Army. However, I am not sure about the procedure.

4) I don’t recommend to visit Wagah Border in the months of May, June, October & November. These months are considered to be peak season for tourism here and the crowd can be humongous! If you are visiting Wagah Border in Summer, I strongly recommend you to carry a bottle of water. It becomes extremely hot and the crowd will surely exhaust you!

5) There are no entry fees to visit Wagah Border. You can get snacks & water near the gate, before entering the stadium.

6) Don’t shy away to be a part of the exuberance. Shout, Cheer & enjoy the electrified atmosphere!

Discovering the magic of education at Varanasi Boat School

How to Spend Time at Kovalam Beach?

Bangalore to Gandikota – A Trip Idea...

All You Need to Know About Shilparamam

A Rainy Day in Mumbai – Nostalgic...

Had been there ones, and the experience is thrilling.
Your post expresses the feeling beautifully

Glad you liked it Pooja 🙂

Can you Expects to what happens at Indian BORDERS?
There are Wars…there are Merciless and killing all over….
The Blood Pools of soldiers are all over…
BUT CAN YOU IMAGINE SOMETHING REAL INSPIRING AND HAPPENING AT ATTARIE BORDER ..
When I was Small I use to watch an advertisement of “Fevikwik-todo nahi jodo”, that was the time I came to know about the WAGAH BORDER CEREMONY and the parade that was going on there. Because the WAGAH BORDER CEREMONY seems to be really happening somewhere across Indian borders I was really anxious to know about it after gathering information.
So today I would like share some of my memoires of this CEREMONY with you all!
The advertisement characterized that the WAGAH BORDER BEATING RETREAT CEREMONY is a daily military practice that the security forces of India starts everyday prior to sunset. This ceremony takes place every evening before sunset at the Wagah border, which as part of the Grand Trunk Road was the only road link between these two countries, Amritsar(India) and Lahore(Pakistan).The ceremony starts with a blustering parade by the soldiers from both sides, and ends up in the perfectly coordinated lowering of the two nations’ flags.
The WAGAH BORDER BEATING RETREAT CEREMONY was started in the year 1959 and since then The soldiers of this ceremony are specially appointed and trained for this auspicious ceremony. They also have a beard and moustache policy for which they are paid additionally.
Border Security Force (BSF) of India and Pakistan Rangers of Pakistan, have jointly followed the drill and they participate and organize the parade. People from Both the countries and especially the local folks over as well as international tourists feel honored and privileged to be there!!
ON THE INDIAN SIDE
To Capture the attention of everyone, the Indian Soldiers and higher officials play Bhangra music and there is an magnetize response from the Indian crowd. Indian Women irrespective of age factor, actively dance over there, small children run holding huge Indian Flags. Now a days there is a short cultural programme also done by local folk dancers.
Both the Indian and Pakistani border forces of the border shout theis country names and a shouting March begins as the sun sets, the iron gates at the border are opened and the two flags are lowered simultaneously. The flags are folded and the ceremony ends with a retreat that involves a brusque handshake between soldiers from either side, followed by the closing of the gates again.
Hope this WAGAH BORDER BEATING RETREAT CEREMONY , creates a very strong patriotism among every Indian.
So .let’s promise to maintain the brotherhood for both countries all the time!
After coming to know about this and watching a video of it,
I really feel like going there to witness those proud moments, on live!!
What about you friends ……
Here is the URL that might help you, in knowing the procedure of WAGAH BORDER BEATING RETREAT CEREMONY…
https://youtu.be/unH_CoUJ8Us

Wagah border is one of the best every placce to visit in amritsar.
It is such a osum place where u can get lot of fun

Thanks for sharing this information